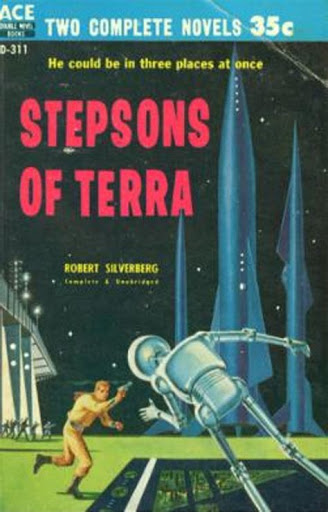 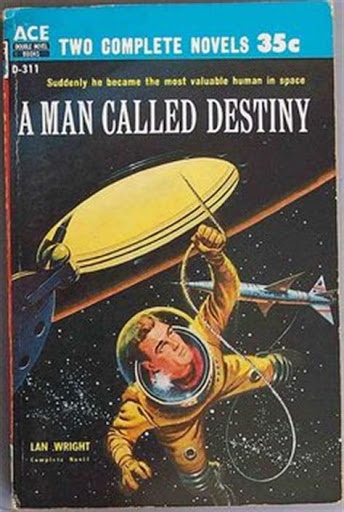 In the year 3800AD Earth has colonized about a thousand worlds throughout the galaxy.  The planet Corwin is in the constellation Epsilon Ursae, about 16 parsecs away (a parsec =3.26 light years).  They are  about to be invaded by the merciless Klodni from the nearby Andromeda galaxy.  The Klodni have already decimated numerous peace-loving planets, destroying and conquering everything in their path.  In a last ditch effort to evade the fate of the other colonies, Baird Ewing has travelled in a one-man ship to Earth to seek help.  The journey lasted ll months, 14 days and 6 hours.  Baird was in stasis during the trip.  Upon landing at the spaceport, he meets a Sirian, Rollun Firnik, a short stocky colonist from nearby Sirius 4 who aggressively accosts him, asking impertinent questions about his reasons for being there.  Making an excuse, Baird walks away and registers at the "A Shred of Vitality" hotel.  A visitor arrives shortly thereafter, a scholar named Myreck from the College of Abstract Science, who invites him to give a lecture to his colleagues the next evening.  Baird agrees and goes down to dinner where he's solicited by Byra Clork, another Sirian agent, who also is interested in his presence on Earth.  It becomes evident that Earth is under threat from the powerful and belligerent Sirians, who are planning a take-over of Earth for its own good, as they believe that the planet's ancient and florid culture needs more discipline.  After dinner, Baird is kidnapped by the Sirians and subjected to the third degree, but rescued by a tall man wearing a gold mask.  Myreck re-appears and takes Baird to his College (which is invisible, being a micro-second behind "real" time).  Baird is astonished to discover that the scientists have invented a time machine, but one that only is capable of traveling into the past.  Convincing the staff members that he needs to use the machine, he projects himself three seconds into the past and wakes up in a meadow outside the city.  He robs a citizen and used the money to travel back to the city.  He buys a gold mask and rescues himself from the Sirians, then purposely commits suicide by overloading the circuitry in a phone booth until it explodes.  Then the rescued Baird returns to the College but doesn't enter it in order to avoid a temporal paradox.  Instead, he goes back to his ship and is about to take off, returning to Corwin, when yet another Baird calls him on the radio and insists on a meeting.  He goes to see the other Baird who tells him that there were four Bairds;  the one he's talking to is the one who rescued the kidnapped Baird but didn't blow himself up.  The two make a plan to steal the machine and the plans for it, then sneak into the spaceport.  One of them distracts the police while the other powers up the ship and takes off.  The distractor is killed during the take off, presumably leaving only one Baird left, the one who's going back to Corwin with the time machine.  Back on Corwin, Baird convinces the council to let him build the time machine and install it in his ship before the Klodni show up.  When the vast fleet of 750 vessels enters Corwin space, Baird takes off and projects the time beam at the fleet and sends them 5 billion years into the past.  Then, after the celebration and decorations are over with, he builds yet another mobile time machine in his basement and duplicates himself once more.  Leaving the simulacrum to stay with his family, the other one returns to Earth to fight the Sirians.

"Jones planet wasn't the best place in the galaxy to be stranded with a broken drive unit."  Argyle is sulking in a second-rate saloon in the well-used city of Jones on the planet Jones, waiting for repairs to the ship which will take four weeks at least.  He's a second grade Engineer and is morose because the planet has no telepath.  Telepaths are used for communication across the galaxy and are the only means of contact between planets and the huge, Amazon-like trading corporations that connect one world with another.  Spiros, an agent of the Dellora Corp., buys a glass of Jones brand whiskey for Argyle, and offers employment.  Apparently Argyle's wife had been a personal secretary to the owner/operator of the Dellora corporation, and since she had recently died, Pietro Dellora wanted to hire her husband to replace her.  So they travel to the planet Dellora, where Argyle takes a room in the Galactica hotel.  A lawman pays him a visit, informing him that Spiros has been assassinated with his own needle gun.  Argyle then pays a visit to Pietro's space station, the headquarters of Dellora corporation.  He finds Pietro enormously fat but mentally astute.  Back at the hotel, an attempt is made by another assassin on Argyle's life.  In the middle of the night a thin perp appears out of nowhere and shoots but misses and then vanishes again.  The police arrive in the morning and arrest Argyle for the murder of Pietro, who's been shot.  He escapes the police and hides away on a freighter outbound for Rigel 5.  He meets the arresting officer, Lawman Sworder, who, knowing of Argyle's innocence, advises him to consult with Preacher Judd on planet Earth.  Judd is the leader of the largest political party and wields enormous influence in planetary and galactic affairs.  Before Argyle can contact Judd, another attempt on his life is made:  a local jeweler is assassinated and the gun left in Argyle's hotel room.  But Sworder smells a rat and realizes that Argyle is being set up, and advises him to go back to Rigel 5.  So he does, but the ship stops half way there and the passengers are taken aboard a second ship which voyages to a dead world named Leemos.  Judd arrives and tells Argyle that Pietro's son, Alfredo, has been behind all the attempts to frame or kill Argyle, and that it's all been a devious plot to grab power.  Alfredo wants Argyle dead because Pietro has left everything to Argyle in his will.  Judd also informs him that he's immortal, and one of an increasing number of psy-heightened humans who are being born with all sorts of different psychic abilities, teleportation, telepathy, telekinesis, and others.  The theory is that with the augmented distribution of humanity through the galaxy, the expansion of mental abilities has occurred as a result.  They all return to Dellora, where a summit meeting is about to take place among all the leading trading corporations.  At the meeting, Alfredo tries to hog everything in spite of his father's will, using Argyle's psychic talents as reason to oust him ( how can trade exist if every one knows every one else's motives?).  But Argyle demonstrates that Alfredo is a psychic also and that they are not to be feared.  Alfredo fires a shot at Argyle, but Judd's secretary, who's a psy talent also, shoots him before he can get away.  So Argyle takes over the business, content in the knowledge that the Galaxy is now in the hands of the psychically talented.

Both of these were good efforts i thought.  The Silverberg was one of his first efforts and it was better than Wrights.  The latter seemed a bit hit or miss insofar as plot organization was concerned:  it read rather jerkily and although Wright was a well known author in Britain, it might have been improved by a little editing.  But it held my interest.  The Silverberg   was much better, imo of course, showing a lot thought even in the descriptions of the complex temporal events taking place in the College of Abstract Science (wonderful place-name).  Silverberg's Majipoor chronicles should be mentioned as good examples of his remarkable ability to evoke detailed cultural emulations sci fi or not...  These stories are dated, true, but still very much worth reading, being chock-full of interesting events and ideas...

Posted by mudpuddle at 1:53 PM