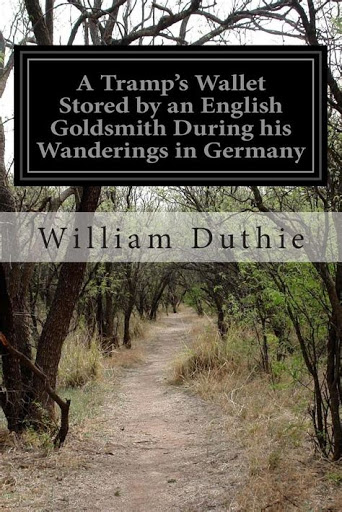 This is a peculiar book.  Duthie, a London goldsmith living in the mid-19th C., decided to take a tour of Europe on foot, partly to demonstrate that is was possible to do such a thing without extensive prior funding.  The first section, about a hundred or so pages, was used to detail the expenses of his trip, together with some ancillary comments about isolated individuals and incidents that he encountered:   how much he spent per day on food and so forth.  The second section was much longer and, repeating the itinerary of the first section, dealt with his experiences and accidents and some of the tourist attractions that he admired along the way.  Two categories of interest that he delved into had to do with work conditions; and the legal and political strictures governing the lives of the citizens of Germany, Austria and France.  Workers in all of these countries, in the jewelry trade anyway, had to work six to six and a half days a week, 72 hours being a normal figure for a week's employment.  Longer hours than that were not considered overtime.  Payment schedules were enough to enable very basic necessities.  Breakfast was normally bread and tea, lunch perhaps a piece of boiled meat and more bread, and dinner providing bread, soup and possibly a vegetable.  Living arrangements were commonly limited to six or more associates sleeping in one room, often in the house of the employer.  Days started at six AM and ran until six at night or longer, if there was a major project in hand.

Duthie found that, even when walking from town to town, the police kept stringent control of all transient movements.  He and his fellow travelers usually had to get a visa stamp when entering a town, or passports were confiscated during the period of employment until the worker left the city.  As part of the normal regime, there were many more official regulations governing social and business functions than Duthie had been used to in England, and many more policemen present than he had been used to in London.

Initially he landed in Hamburg, where he worked for an English jeweler.  He made several friends there some of whom accompanied him in his later peregrinations.  He took the road to Berlin after seven months, renting a seat on a wagon for several pence for the last sixty miles.  As in the other cities he visited, he first had to register with the police, then find the local guild hall.  Guilds were present all over Europe and there were systematic procedures for traveling workers to register, receive small amounts of money, and sometimes places to sleep, as well as, if lucky, the occasional dinner.  The guild halls varied enormously in quality, some dirty and bug-ridden, and some clean and well run.  Nonetheless, they were hubs from which to search for work, or from which to obtain clothing and other necessities.

Duthie had a lot to say about the military monuments in Berlin, beginning with the Brandenburger Tor (the gate of the city), and ending with the opera house and the vast arsenal with munitions and gunpowder.  The memory of Frederick the Great permeated the cultural and artistic structures.  The Spree river runs through the city and a lime tree lined street followed it for miles.  There was no work to be found there, so William left after a week, taking the railroad to Leipzig, partly because the ground surface in that part of Prussia was so sandy that it made walking difficult.  (Madame LeBrun said the same thing in last week's post, even though she did walk a lot of the same route).  Almost at once, upon arriving in Leipzig, he returned to Berlin for six weeks work, but then caught the train back again for a brief stay before setting out to walk to Vienna.  He had several partners on this leg of the trip and they toured through Prague and Moravia.  Eighty miles from Vienna, he and his partner Alcibiade had only 4 shillings left between the two of them,  They survived on fruit, it being late spring, and water.  They had a lot of formalities and regulations to deal with when they got there.  Initially they were only permitted to stay 3 days, but using some of the guild connections, they gradually waded through the regulatory swamp and managed to land decent jobs.  However, during a slight altercation with a belligerent policeman, Duthie found himself in jail.  The policeman had knocked his hat off with his club and William took offense, with unhappy results.  He spent 9 days in prison before his friend could get him released.

Soon afterwards, Duthie and Alcibiade left the city, hoping to find friendlier receptions elsewhere.  Near Salzburg, they became curious about a large salt mine that presented certain intriguing elements.  Deciding to take a tour, they climbed up a mountain for four miles, to the Obersteinberghauptstollen, the name for the entrance to the mine, which occupied most of the inside of the mountain.  They walked down a sloping tunnel, led by a guide with a candle, for 3 kilometers, then used the "Rolle" to descend 200 feet to another ramp.  ("Rolle" describes a set of poles situated 12 inches apart, down which a person slides down on his backside through a small tunnel).  This was termed the Untersteinberghauptstulm.  Another Rolle, 600 feet long took them to another 2700 foot long ramp and yet another Rolle that led to the Soolerereugungsuerkkonhauser, an underground lake, across which they were rowed by Charon, noting the eery reflections of candlelight in the pitch-black ambiance.  On the far side, another Rolle 468 feet long to a freshwater spring, some of which they drank, and then boarded a small gauge railway pulled by two boys to the exit at the bottom of the mountain.

They continued walking through Carlsruhe, Bavaria and Munich, and then took the train to Paris.  Duthie lived with Alcibiade and the family of one of his friends, the PanPans.  He lived there for 17 months and then returned to London.

Not much is known about Duthie;  i couldn't find a picture of him, and his book seemed to sell for around $30.00 even though it can be downloaded free from Gutenberg.  The book, as i indicated above, was erratically assembled and i found out later that it was compiled from letters Duthie had written home and to a newspaper while he was traveling en route.  It was interesting to see such a different slant on European civilization of the time;  references and information were included about recent wars and revolutions in Prussia and Paris that seemed to substantiate what i had previously believed about that era;  that a relatively small segment of the population was responsible for major social upsets such as wars and starvation and destruction.  Most people just want to be left alone to live their lives, regardless of the insane convictions of their leaders, even though they may be frequently led into throwing away their lives and possessions in some sudden struggle for what they've been told is "justice".  Delusion is indeed one of the more amoral tools of the political elite, seemingly...

Posted by mudpuddle at 4:55 PM