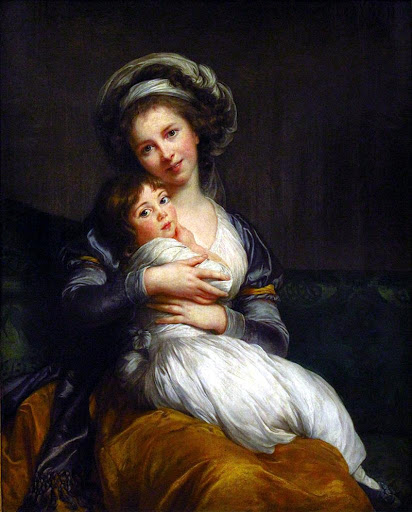 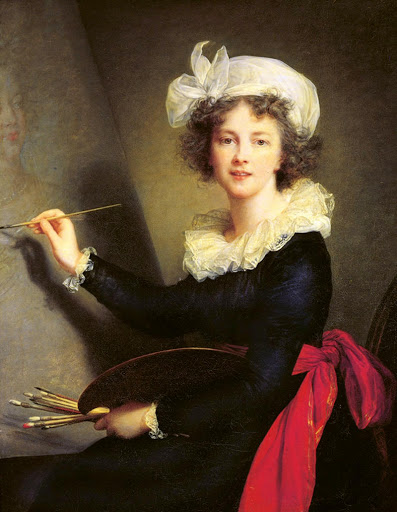 Her dad was a painter and he supported her devotion to drawing from an early age.  She was sent to a boarding school at six and was often in trouble for disobedience:  she spent all her time drawing things and not doing her school work.  But she evidenced a talent and a fierce love of painting which lasted all through her teenage years.  Her father died an early death, partly because of the dinners he attended in the presence of d'Alembert, Helvetius and Diderot, who enjoyed rambling on about the hopelessness of life and the pointlessness of actually trying to do anything.  Diderot, of course, was the man who devoted his life to compiling the first French encyclopedia.  It was banned by the church and government both, maybe for including long sections on the mechanical arts.

Marie studied with various well-known artists, Gabriel Doyen in particular, and was supported by other artists and friends of her father.  She spent a good portion of her time studying in the Parisian museums.  She said:  "the difference between well or poorly lighted pictures is the same as between well or poorly played pieces of music."  She began earning money for her portraits, but her stepfather (her mom remarried a businessman) appropriated her money.  Counts Orloff and Schouraloff introduced her to the upper classes and arranged sittings with some of the ladies of the court, one of them being Marie Antoinette with whom she became quite friendly.  She painted her several times.   Walks in the various parks and attendance at public festivals of one sort or another provided her with social experience and helped broaden her horizons.  She liked fireworks.  When invited out to dinners or the theater, she sometimes sang while accompanying herself on the guitar.  Once, absent-mindedly, she sat down on her palette which she'd laid on a chair.  She got to know LeBrun through her stepfather.  He wanted her to marry him because he thought he was rich.  After a period of contention she did, only to discover that her new husband was an addicted gambler and was in debt up to his eyebrows.  She was twenty when she married and for the length of their marriage, he took all the money she earned from painting and wasted it in card rooms.  Marie later estimated that he'd managed to get rid of a million francs, more or less.  Finally he died and she was able to command her own resources.

Taking advantage of a trip to Flanders, Marie was stunned by the work of the Flemish and Dutch painters.  She thought the work depicting an assembly of alderman by Van Loo was the best painting she'd ever seen, because of their life-like appearances.  After returning to Paris, she was nominated to the Royal Academy, a prestigious organization established for the furtherance of excellence in Art.  Marie made many friends among the elite and painted some of them.  She did three pictures of Madame du Barry;  the Count d'Artois and his family as well.  But nemesis was approaching:  the social atmosphere was becoming more and more intense, with popular uprisings unsettling and alarming the upper classes.  Finally, Marie escaped to Italy, as France was thralled in the grips of revolution, with Jacobin agents permeating every nook and cranny of the country.

In Rome, she was astounded by the wealth of art surrounding her:  the statuary, ancient buildings, and the collections in the many museums and palaces.  The palaces even when privately owned, were customarily open to visitors and tourists, and Marie spent lots of time studying the work of Italian artists.  And she began to be accepted and admired by the nobility as well, resulting in new friends and portrait work.  In particular, she came to know some Russian emigres who later paved her way into St. Petersburg society when she journeyed there.  Life in Rome became intense so for a break she moved to Naples for a while, where she painted various royal figures among whom was the Queen of Naples, the sister of Marie Antoinette.

After touring through Venice and Turin, Vienna beckoned and Marie followed.  Court life there involved lots of dances and parties and she came to know important individuals:  Counts Metternich and Rasumovsky  among others.  News of Jacobin violence caused her much unhappiness and she tried to avoid hearing about the victims of Madame La Guillotine.  She spent 28 months in Vienna, then moved to Prague briefly, visited Dresden, and then ventured over terrible roads to St. Petersburg, where she lived for seven and a half years.  She got to know Catharine the Great well and liked her a lot.  She described the Empress as short and stocky, decisive and intelligent, pleasant but with a whim of iron. Catharine built the Hermitage, one of the largest museums on the planet, and intitiated the practice of vaccination.  She rebuilt towns and added to the merchant fleet, encouraging the growth of trade.  Some of Marie's friends were Princess Dolgoruki, Count Stroganov and General Potemkin.  The society of course was divided between the nobility and the peasantry, with the latter being capable and clever, honest and gentle, mainly because of their adherence to the Russian Orthodox Church.  They seemed to live on potatoes, garlic, bread and corn brandy.

After a 34 year reign, Catharine died and her son Paul was coronated.  He was unpopular with everybody, being capricious and unpredictably violent.  He hated the Russian upper classes and was probably a bit mad.  Perhaps coincidentally, Marie moved to Moscow in 1800.  She did more paintings and met more Counts and Generals:  Prince Bezborodko owned 30,000 kulaks (peasants were property at this time), Count Buturlin was a multi-lingual polymath and was the possessor of a huge library in all languages.  Marie wasn't terribly happy during this period, because her daughter whom she dearly loved had married poorly, against her mother's wishes.  So after only five months in Moscow she returned to St. Petersburg to find that the Emperor Paul had been assassinated.  The next Emperor was Alexander I, who promised Marie he'd fix the roads.  Even so, she left the city partly because of her thorough dislike of her son-in-law and partly because she was not feeling well.

She traveled through Prussia, walking part of the way because the carriage driver smoked evil-smelling tobacco, and arrived after a tedious journey in Berlin, where she lost her voice from yelling at customs officials.  Following a brief tour of the museums, she returned to Paris after being absent for 12 years.  Renting a house, she was joined soon afterwards by her brother and sister-in-law, and her daughter who'd left her husband.  Marie now saw a Paris that seemed cramped and dark.  She attended a military review, where she had a lot of difficulty believing that "that tiny man" was Napolean Bonaparte.  She was restless and took ship to London, where she lived for three years, off and on, taking frequent excursions in the countryside to escape the fogs and damp of the city.  She visited William and Caroline Hershel, the astronomers, and walked on the beach at Brighton.  Painting still occupied much of her time;  she approved of the work of Joshua Reynolds and did a number of portraits of French emigres.  But growing discontented, she returned to Paris to see her daughter and ended up in Switzerland and subsequently in Louveciennes, where she rented another house.  One night she woke up to see four soldiers ransacking her room, stealing all her jewelry and clothes.  Fortunately they paid no attention to her.

After Waterloo, things gradually returned to normal, with King Louis 18th re-assuming the throne for a brief period, being succeeded by the Duke de Berri his brother.  Marie retired for good soon after that, establishing herself in Louveciennes, where she lived out the balance of her life painting and taking walks.  Her daughter and son-in-law died in 1819, and her brother in 1820.  One of her nieces, Tripier la Franc, became a portraitist and did well.

This was a curious book to read;  rather like exploring an unknown country through a keyhole.  Marie's style, in translation, was warm and familiar and sort of like reading a letter from a favorite aunt.  Her prejudices and social opinions were clues to the type of person she was, friendly and perhaps a bit naive, habitually regarding her world with a cheerful and accepting point of view.  I quite liked it.

Posted by mudpuddle at 3:16 PM