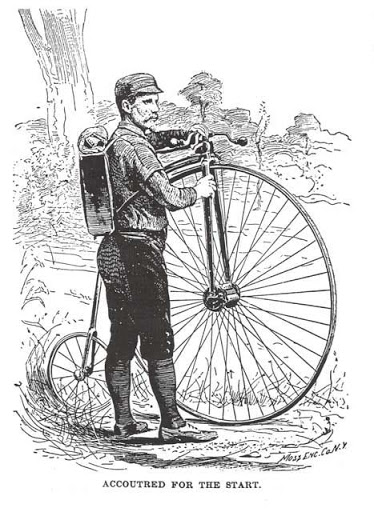 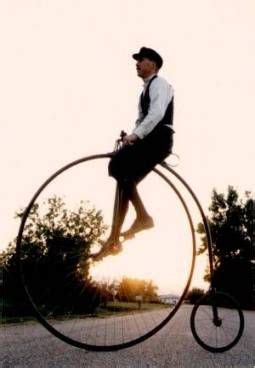 PEDAL AND PATH:  ACROSS THE CONTINENT AWHEEL AND AFOOT

George was already an experienced cyclist in 1887, having made trips through New England of 500 and 1200 miles, the former in 3 weeks and the latter in six.  By the time April arrived, he was eager for something new and challenging so he determined on riding to San Francisco for the pleasure of it.  He was not out to set any records, he just wanted to see what was out there.  Also, since he was a sometime journalist, he planned on keeping the newspapers in Hartford, Connecticut informed as to his discoveries and adventures via his letters.  His vehicle was an "Expert Columbia", 46" in height and he carried a 15 lb. pack for clothes and bicycle stuff.  The tires were solid rubber.  The first day was tiring, as he hadn't ridden in three months, and the initial destination of New Haven was only arrived at after a full day's arduous toil over sandy and rutted roads.  He stayed there for three days, touring the city and visiting the Peabody Museum which was renowned for its fossil collections.  George had some interest and knowledge in geology and described some of the local formations and the origins of the Appalachian and Adirondack mountain chains.  The latter, composed of basement rocks from the billion year old Laurentian orogeny, are some of the oldest mountains in the world.

He was pedaling away near Tarrytown, after visiting the Sleepy Hollow graveyard, when he was almost knocked off his bike by explosions.  Investigating, he located the headquarters of the project-in-progress of the aqueduct extension designed and in the process of being excavated to provide water to the city of New York.  Talking to one of the supervisors, he was offered a chance to descend a vertical shaft 360 and to examine the operating procedures of the miners who were digging the tunnel.  The plan was to push the tunnel under towns, rivers and mountains forty miles all the way to the city.  George didn't go because of some of the horror stories told him by some miners lolling about the entrance.  Eventually the tunnel was completed in spite of the dangerous working conditions.

For the most part, cycling over the mountains was a non-pedaling event, as George usually had to push the bike up the steep parts and often over not-so-steep ones.  But he loved coasting down the other sides.  His technique was to extend his legs over the handle bars and steer with them while hanging on to the seat at the same time.  His progress, once across the mountain ranges, was often difficult, dealing with rutted roads covered with sand and/or mud that meandered back and forth over the Hudson and other rivers.  Sometimes even horses got stuck and had to be pulled out using boards as levers and fulcrums.  Dogs were common and most of them had developed a taste for shoes. He usually stayed  overnight with farmers, but sometimes in hotels.

At Niagara Falls he rode out onto Goat Island to get a better view and an old lingerer told him a story about an argument between the American and Canadian authorities that ended up with a steamship being pushed over the Falls while on fire.  Ohio was a rather depressed countryside, with dilapidated houses and seas of mud.  There were lots of sheep and pigs on the road.  The soft coal that was commonly used for heating and cooking coated all the buildings and people with black dusty tar.  He got tired of fighting the grueling conditions and took the train for the last 120 miles into Chicago.  Leaving that city, he pedaled on toward the confluence of the Missouri river.  One local resident told him about the fierce cyclones common in that area.  One recent one had destroyed two stone buildings in five minutes and killed 58 people.  Coasting down a hill in Iowa the bike hit a chuck hole and George flew over the handlebars and landed on all fours and his pack hit him in the back of the head.  Soon afterward he caught a freight train to Omaha and liked it so he continued on to Denver.

He met a friend in that city and they biked together for quite a while.  They traveled south to Pike's Peak and climbed it.  George got altitude sickness but toughed it through to the top at 14,000 feet.  They stayed several nights in the mountain chalet there and saw fantastic sunrises 150 miles away.  Like a true geologist, he and his friend spent some time rolling rocks off the top.  They visited the Garden of the Gods and continued north, stopping in Ft. Collins, where George noticed that water was scarce at that locality.  Citizens had to pay for it there, whereas in the more eastern states people had to pay to get rid of it because of the seasonal flooding.  The two cyclists took the northern wagon train thoroughfare through Laramie and Rawlins.  They got tired of fighting the constant headwind, a constant presence on that route, and took the train to Green River where they admired the red cliffs in Echo Canyon, then continued on to Salt Lake City.  George took a swim in the Great Salt Lake and was amazed at the floatational qualities of the fluid.  He admired the city and some of its inhabitants, but criticized some of the Mormon churches for their sleazy atmosphere.  Crossing the desert seemed counter-productive so they entrained to Lake Tahoe where they stayed for a week.  Liking that mode of transportation they continued on the railroad over the Sierras to Sacramento.  Bicycling through the Valley by himself, George toured the Calaveras Big Tree monument and then did a lot of hiking in Yosemite Valley before taking the train to San Francisco.

After several weeks partying and visiting he caught the train to Monterey and stayed for awhile.  Back in San Francisco he boarded a ship for Portland, Oregon and was seasick much of the way, along with most of the other passengers.  They were cooped up in a smallish cabin with insufficient traveler's aids so he spent most of the time sleeping on the deck.  He left Portland on the train but got out at the Snake River so he could ride to Shoshone Falls.  He noted the extensive areas of flood basalts and speculated on their origin.  On the train once again to Pocatello, Idaho, he left that city on his bicycle and headed toward Yellowstone National Park where he visited many of its 71 geysers.  One of the handlebars stripped out on the bicycle, so he had to find a blacksmith to fix it.  He found the shop but the smith was absent, so George found a tap and die set in one of the drawers and hacksawed off the stub of the bar, threaded it, and screwed it back together.

On the return to Connecticut, he went further south, through Kentucky where he was feted and celebrated by some but chastised by others for violating the Sabbath.  He ended up entraining through Ohio again but rode a long section along the Potomac River until he reached Baltimore, then took the railroad home to Hartford.

This was an impressive feat for that era.  The book was attractively written and easily comprehensible.  George faced the trip's dangers and pleasures with equanimity, maintaining his psychic balance in difficult and occasionally provocative situations.  He seemed to take the bad with the good in quite a philosophical manner, and consequently achieved a kind of objectivity not often found in descriptions of personal endeavors...  i liked it, and probably most readers would also...  The book is listed in the files of the Gutenberg Project.

Posted by mudpuddle at 4:12 PM