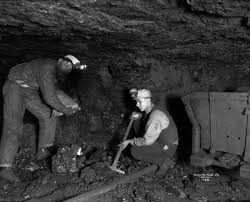 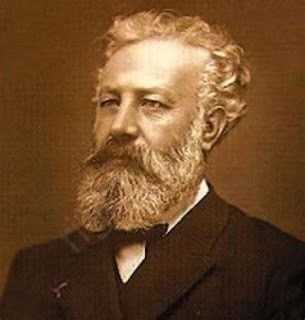 This tale takes place near Loch Katrine, in Scotland.  Simon Ford, his son Harry and wife Madge live in a cottage at the bottom of the abandoned Aberfoyle coal mine.  The mine was closed ten years ago when the seam of coal ran out.  But Simon, ever hopeful, thinks he's discovered evidence of an extension of the old stratum, and writes a letter to his friend, F.R. Starr, a mining engineer, to invite him to dinner and to see something interesting.  When he arrives, they meet at the train station and travel back to the mining site, where they descend into the Dochert Pit, one of the upper levels of the mine.  The Ford residence is dimly lit by a vent extending to the surface.  After dining, Simon, Harry, Madge and Starr descend 1500 feet by ladder into the Aberfoyle mine itself and Simon leads the others to the end of a remote gallery (the mine is a maze of tunnels and passages extending for miles in every direction).  Along the way, Harry checks for firedamp (methane) as they progress.  Methane is explosive when mixed with air.  As they progress, Simon tells the others about the ghost in the mine.  A shadowy figure has been seen flitting by at times, and strange sounds have been heard occasionally, like pounding or cracking inside the tunnel walls.  At one spot, one of the supporting pillars has been blown up.

They reach the end of their long walk (4 miles) and Simon tries to find the firedamp leak that he had noticed sometime earlier, firedamp being an indicator of the presence of coal, but the fissures that he'd previously discovered have been plugged up with lime.  Undeterred, Harry attacks the wall with his pick and opens up a new crack from which firedamp is detected.  Excited, the trio returns later with dynamite and blows open the stope (a producing wall of coal) and reveals a completely unknown labyrinth of passages, all rich with coal and ready to be mined.  They explore the vast new maze for a long time, revealing a bottomless pit and an underground loch in addition to a rich, unlimited source of coal.  Then Harry accidentally drops his lamp and it breaks.  Even though they're stranded without light, they manage to find their way back to their starting point, only to find that what was a blown open entrance has now been filled in, so they are no longer sure of how to return to the old Aberfoyle galleries.

Meanwhile, the local citizens have seen flames issuing from the top of the old DunDonald castle, a nearby ruin on the edge of a firth.  One stormy night, a ship is wrecked on the rocky shore, having mistaken the flames for the Irvine light, a local channel marker.  After rescuing the crew, one of Harry's friends, Jack Ryan, realizes that Harry has been absent for a while, so he pays the mine a visit and finds that that nobody is home.  A rescue party is organized and the members begin to climb down the series of ladders but are chagrined to find that the bottom 200 feet is ladderless.  They have to use rope to get to the bottom.  Following the tunnel to the end they are able to rescue the four trapped explorers who are still alive after ten days because a mysterious entity has left food and water for them.  They had found a girl unconscious at the lowest level, who helped them backtrack to the entrance of the New Aberfoyle mine.

Three years later, the new New Aberfoyle mine is in full production mode.  Electric light has been installed and a small city has been built to expedite the removal of the coal.  Train tracks have been laid and trams laden with the "black gold" are being shunted to the outside as rapidly as possible.
There are ducks on the underground loch (Loch Malcolm) and domesticity has regularized the existence of the subterranean mining community.  In order to further the education of Nell, the family takes a trip to Edinburgh.  They tour Arthur's seat and admire the view and later take a ferry across Loch Katrine.  In the middle of the lake, they hear a loud roaring sound and all the water vanishes, grounding the ship.  A little surprised, they return home expecting to see everything drowned, but discover that Loch Malcom has only risen a few feet.  After investigation, it's evident that some of the pillars supporting the roof (also the bed of Loch Katrine) have been destroyed by explosives.

Nell and Harry fall in love, and a wedding ceremony is held on the bank of Loch Malcolm.  As the ceremony is being performed, another loud explosion is heard, part of the shore of the Loch vanishes, and water begins to drain into the gallery below.  At the same time an old man with a huge owl is shooting across the water in a canoe, waving a broken safety lamp in an apparent attempt to blow up the entire village by throwing the lamp up toward the ceiling, where firedamp has collected as a result of the explosion.  Nell cries to the owl to catch the lamp, which it does, thereby saving the lives of the inhabitants along with their houses.  The old man, Nell's grandfather, disappears into the depths and the survivors live happily ever after.

I'd never heard of this Verne production before i ran across it on the Gutenberg site.  It's certainly not one of his best known novels, and is rather haphazardly assembled, but it possessed the perhaps questionable feature of having an explosion periodically to keep the reader alert.  There was a major scandal several years ago about the translations of Verne's work.  The most available versions at that time were ones that were translated by a relation of Verne's, and there was a lot of criticism about the quality of his renditions.  Since then, there have been several new translations of some of his works published, but i haven't heard of any comprehensive edition arriving on the market, so perhaps the versions we have, barring knowledge of the French language, may be the only door we have to Verne's original thoughts.  Most of the ones i've read are still pretty interesting, and Verne remains a welcome resource for those attracted by older works of science fiction...
Posted by mudpuddle at 12:35 PM