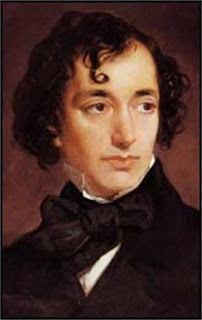 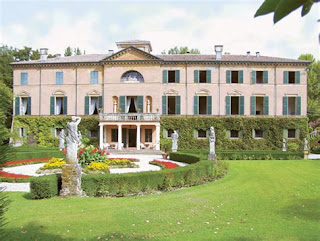 Venetia Herbert was the daughter of Annabel Herbert.  Her father was Marmion Herbert.  Venetia and Annabel lived in Cherbury, a remote village in southern England;  Annabel had left her husband because of his erratic behavior.  Marmion was a poet/philosopher who tried to make his intellectual fantasies a reality.  After destroying his social standing in England, he emigrated to America, where he became a general in the American army during the Revolutionary War.  Meanwhile, Venetia and her mother lived a quiet life, dining frequently with the reverend Masham, who lived in a neighboring rectory.  Another neighbor was Plantagenet Cadurcis, who lived with his mother just over the hill in the Abbey, the home of the Cadurcis family for generations.  The elder Cadurcis was also separated from his family due to his rake-hell predilections.  He was a member of the English nobility and when he died, his son became Lord Cadurcis.  Plantagenet and Venetia became friends, walking in the local woods and playing together in the gardens and bylanes of the area.

Plantagenet became tired of his mother's nagging and ran off to join the Gypsies.  Mr. Masham tracked him down and returned him to the Abbey, but shortly thereafter, Mrs. Cadurcis passed away and Plantagenet was sent to Eton.  Initially he was a successful student, but when he entered university, he became obsessed with philosophy and poetry to the detriment of his studies.  He read  the works of Marmion Herbert and became enamored of them.  His poetry took London by storm and Plantagenet was in an instant precipitated into the upper echelons of London Society.  He was a popular rage for a period, but viewed his flamboyant position with disgust and apathy.  After five years absence, he returned to Cherbury for a visit.  Venetia and he resume their walks and games and fall in love.  He proposes, but Venetia for various reasons turns him down.

While Plantagenet was in London, Venetia had become curious about a wing of their residence that had been kept locked up ever since she and Annabel had moved there.  One night when her mother was absent, Venetia found a key to the door of the hidden annex and found a very large picture of her dashing father hanging amid ornate and grandiose furnishings.  She immediately fell head over heels in love with him, to the point that her sanity became endangered.  She vowed to find him and restore him to her family.

Partly to distract her daughter, Annabel moves her household to a small villa near Weymouth, a popular watering place near the ocean that attracted many persons from London Society.  One day, Venetia is introduced to the King and Queen and they become friends.  A short time later, the Herberts move to London and are accepted into the most illustrious segments of the aristocracy.  Venetia is presented at court.  She meets George Cadurcis, a cousin of Plantagenet's and a Captain in the British Navy.  Plantagenet is entrapped by a Lady Monteagle, who is infatuated with him,  to the  displeasure of her husband.  A duel ensues in which the latter is wounded and Plantagenet becomes very unpopular as a result.  After visiting Parliament one day, he is mobbed by the citizenry to the endangerment of his life and is only rescued at the last moment by the intercession of his cousin George.  As a result, Lord Cadurcis leaves England.

Venetia and her mother leave England also, traveling in a sort of Cook's tour through Switzerland and Italy.  They take a villa for a while on Lake Maggiore and George, passing through on his way to Sicily to meet Plantagenet, stays with them for several days.  News is exchanged and later mother and daughter continue their travels to Rovigo, where they accidentally meet Marmion.  The father is old now, and tired of fighting the world.  Annabel realizes that much of her behavior for the last fifteen years has been driven by pride and selfishness, but she and Venetia leave precipitately when they discover that Marmion's mistress is lodging in the same inn.  They journey to Venice, where Venetia becomes ill with her longing for her father.  Acting upon the information conveyed to them by a courier, they take a boat ride to a local island, the location of an Armenian monastery, where they once more meet Marmion and come to a sort of resolution of their difficulties.

The Herbert family, now reunited, make their way west to a small villa near Genoa owned by the Malaspina dynasty, and spend happy hours together.  (spoiler ahead, beware...)  They are joined by George and Plantagenet and the five friends rejoice in the peace and comfort of their simple life.  But a white squall arises when Marmion and Plantagenet are out sailing, and they are both drowned.  Returning sorrowfully to Cherbury, Venetia and her mother live a hushed existence until George arrives some time later to cheer them up.  George and Venetia fall in love and are married and they all live happily ever after.

This is not one of Disraeli's worst novels.  In fact it was a lot better, i thought, that his previous one, Henrietta Temple, which was a monstrous hit in England at that time and which i found tedious and quite boring with repetitious maunderings on why the heroine and her beloved could never get together because of minor problems with the attitudes of some of their relatives.  Disraeli writes glowingly when he wants to, with long sentences flitting across the page like butterflies on a spring day.  He has the gift, not given to every writer, of bringing scenes full-blown into the head of the reader, precipitating him or her bodily into the middle of whatever castle or forest he happens to be describing.  Plus he can turn a trenchant phrase with the best:  "We exist because we sympathize";  want of love, or want of money, lies at the bottom of all our griefs";  "...men have always been fools and slaves, and fools and slaves they will always be"...

If long Victorian novels turn your crank, i'd definitely recommend this book;  or if not this one, Vivian Grey, his first novel, that has the most shocking ending of any book of that period i've ever read.  Disraeli is really worth some time and i've frequently wondered why he wasn't just as popular as Dickens or Thackeray...
Posted by mudpuddle at 1:30 PM