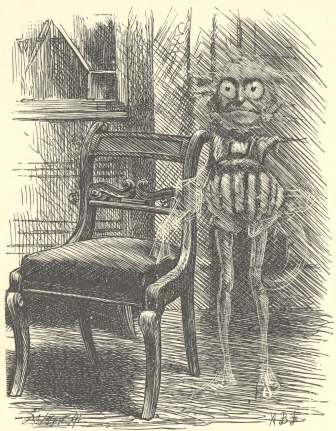 Note:  lots of spoilers in this article

Mr. Tibbets had just arrived home after a hard day's toil.  Entering his library, he relaxed into his favorite chair and reached for a book.  There was something in his way.  A filmy sort of half-seen and rather formless miasma was apparently standing next to his chair.  When he noticed it, it spoke to him, explaining that he was a ghost, a phantom actually, and he'd come to do a bit of haunting.  He'd been assigned this house because it had been recently vacated by the former occupant due its poor quality wine and paltry offerings in the way of sustenance.  And he went on to explain the five rules of etiquette that applied to basic houses and simple forms of ghost.  Pulling off sheets in the middle of the night was done from the center, not the ends;  illumination by red or blue light only;  no contradicting ghostly victim;  no trespassing on other spirits territory;  and hosts shall be addressed as "Sir".  As said, he was actually a phantom, but there were many other types of spirit, including spectres, goblins, kobolds, elves, sprites, etc.  Transportation was a difficult subject:  some forms were permitted to fly, but phantoms had to walk.  Speaking of which, Tibbet's phantom made a subtle reference to his weariness and mentioned that food and drink were not rejected by any sort of phantasm.  Mr. Tibbets, prodded into hospitality, suggested a bit of duck and a mild wine, which presently arrived.  The duck apparently satisfied, but the wine didn't.  The bottle flew through the air, impacting Tibbets on the nose.  Quietly whining to itself, the ghost grumbled about former discomforts, about sitting on fence posts and eating buttered toast, and began to reveal some of his history.

His father was a brownie and his mother was a fairy.  He had had many siblings to compete with, a troll, a pixie and others and he was made to practice squeaking and gibbering  at a very early age.  His career began at the age of six, learning about sheets, chain clanking, light flickering and the other arcane mysteries associated with haunting.  Learning how to "trim" a house required a lot of study:  how to loosen door hinges so they creaked, where to place small holes in the walls to enable cold drafts, sitting on sleeping victims to make them choke, and a myriad other tricks and ploys to create panic and alarm.

Mr. Tibbets and his ghost got along along fairly well after a while.  They took a little time out to contemplate Sam Johnson's famous words:  "in union is strength but onions are a weakness".  In order to formalize their relationship, the ghost asked Mr. Tibbets his name, which not been previously alluded to.  Upon hearing "Tibbets", the ghost turned white and became irate, suddenly realizing he had entered the wrong house.  He'd been looking for the residence of Mr. Tibbs, not Tibbets.  He started raving about a four mile walk in the rain and the mud all for nothing and it was all Tibbets' fault.  After raging for a short while, the ghost apologized to "old turnip-top" and walked off through the wall.  Mr. Tibbets wondered who Tibbs might be, while taking a fortifying draft.  He sang a solemn Coronach and mused that he was too old for a parallelepiped and fell asleep.

This was a poem, of course, and it was the first installment of a number of others in the same volume:  "Phantasmagoria and Other Poems", as it was first published.  Some of the others were humorous also, like the Melancholetta about whale blubber, the "Three Voices", Atalanta in Camden (spoofing Swinburne), Four Riddles (complicated), Tema Con Variazione, etc.  Reading these verses i couldn't help but think of other humorists, Lear, Wilde, Swift, Moliere and its hard to believe that they all didn't read and interact with each other, taking bits and pieces from one source or another and reshaping them, using different sorts of plaster before cementing them into their own works...  At any rate, Lewis shows his true genius in these poems;  he had a truly original mind...

Posted by mudpuddle at 1:54 PM