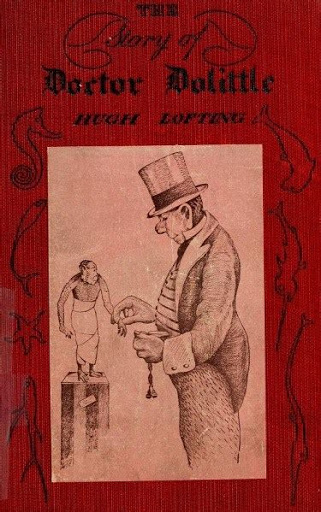 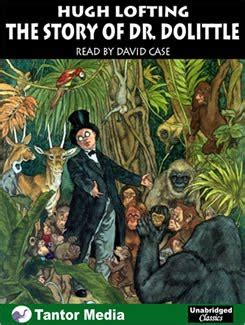 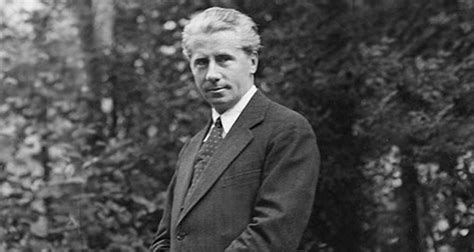 THE STORY OF DR. DOOLITTLE

THE VOYAGES OF DR. DOOLITTLE

Mr. Lofting was hunkering down on the front lines in WW1 and trying to write a letter to his family.  He couldn't very well say what was actually happening, as it would have been too shocking, so he decided to tell them a story instead.  And after that letter, another on the same topic soon arrived in England, and...  Upon returning home he collected the letters and wrote the first book about Dr. Doolittle entitled, "The Story of Dr. Doolittle".

Having graduated from medical school, the good doctor was trying unsuccessfully to make a living in the little seaside village of Puddleby-on-the-Marsh.  His sister Sarah is living with him and taking care of the house-hold chores, but she's not happy about all the animals inhabiting the cottage.  The Dr. has lots of pets, from white mice to a 186 year-old parrot, Polynesia.  His medicinal practice is declining rapidly and money is becoming scarce, so on the suggestion of the cat food vendor, he decides to specialize in the care and healing of animals.  In pursuit of this decision, he begins to study animal languages.  It's not long until he can communicate with most species and it becomes apparent that he has a natural gift for understanding most sorts, including birds, rabbits, dogs, parrots, and many others.  It doesn't take him long to learn crocodile when a member of that species shows up on his doorstep one day.  Money continues to be scarce, though, and soon Sarah leaves to get married (unwilling to clean up after a crocodile) and he's left alone with his menagerie.  A message arrives one day in the person of a monkey, Chee Chee, who says that Doolittle's skills are badly needed in Africa, as there's a raging epidemic among the population of monkeys on that continent.  Having nothing to keep him in Puddleby, he decides to go there and borrows a ship from a friend and buys a lot groceries, telling the grocer he'd pay him when he got back.  Many animals go along and when they arrive in Africa they induct Chee Chee as guide and he leads them through the jungle to the land of the monkeys.  Except they happen to travel through the territory of Jolliginki whose king hates white people, so he captures them and throws them in jail.  Polynesia convinces the King to release his prisoners by hiding under his bed and pretending to be the Dr. (Parrots can imitate almost anything).  But the King soon discovers he's been tricked and chases the beleaguered party to the edge of a canyon.  Chee Chee gets some of his friends to join hands and to form a bridge to cross the gulf;  a monkey bridge, as it were.  So they all escape and reach the land of the sick monkeys.  The doctor cures them after about three weeks and in appreciation they give him the only known example of a pushmi pulyu, an animal with a head on each end of its body.  Returning the way they came, they are taken by the King's forces again, but the King's son, Bumpo, helps them escape and they arrive at the ship.

Sailing homeward, they are chased by Barbary pirates and are about to be overtaken, when Polynesia enlists the help of a lot of seabirds to pull the ship out of the reach of the buccaneers.  They anchor in the bay of a nearby island but discover to their horror that the ship is sinking and that the pursuers are about to board them.  So when the pirates are otherwise occupied, they sneak aboard that vessel while the pirates are busy looking for loot on the their original ship.  It sinks and the Dr. and friends sail away to safety.  After a few more adventures, they return to Puddleby and the Dr. tours around the vicinity for a while, showing off his pushmi pulyu for which he earns a lot of money to support his expanding animal practice.

The second book is chronologically the second in the series, but was written out of sequence, several years later.  The doctor has been busy taking care of the local animal population.  He's come to know a hermit, Luke, that lives in a shack on the beach.  He's a sort of morose man who eschews company of any sort except that of his bulldog Bob.  One day, Tom Stubbins, the doctor's apprentice, informs the doctor that Luke has been arrested for murder.  Convinced of the man's innocence, the Doolittle talks to Bob and finds out the truth.  He demonstrates his ability to speak dog in the court room and, through the testimony of Bob on the witness stand, he's able to convince the judge and jury that the prisoner in guiltless.

Later, the doctor receives notice that an old friend, Long Arrow, perhaps one of the most skilled naturalists in the world, has vanished in South America.  Doolitle decides to sail to his rescue and acquires a ship and crew and sets sail for the southern Atlantic.  It's not long before they find several stowaways.  The extra passengers are not wanted, so they stop at the Cape Verde islands to drop them off.  The doctor finds out about a bull fight scheduled the next day and, in order to make a lot of money, he bets the principal matador that he can produce a better show than the professional bull fighter.  He does, of course, after talking to the bulls, and ends up having five bulls in the ring at the same time and demonstrates his total control by having them dance a pavane in the sand.  Doolittle is the hero of the hour and gets a lot of money. Setting sail once more, they are caught in a hurricane and the vessel breaks into two pieces in the storm.  Tom Stubbins wakes up tied to the stub of a mast, still attached to  the deck that was torn from the ship.  He unties himself and Miranda, a Bird of Paradise -a friend of the Dr.and who has just flown over from the continent-tells him the rest of his friends are on another ship fragment and he rejoins them.  With the help of Polynesia and Miranda, they enlist the aid of porpoises to shove them in the direction of Spidermonkey island, where Miranda has learned that Long Arrow was last seen.  Spidermonkey is a floating island, so its exact position is a matter of speculation.  They find the island, however, and the Dr. captures an extremely rare beetle and finds a message wrapped around one of its legs, apparently written by Long Arrow, saying that he and his fellow Indians are trapped in a cave on one of the mountains.  They investigate and discover that a monstrously large sheet of granite has fallen over the entrance to the cave, trapping the spelunkers inside.  So the doctor with the help of the crew undermine the soft base that the stone is resting on, causing it to slide a sufficient distance to allow the trapped sufferers to escape.

The augmented group comes in contact with the Popsipetel tribe, indigenous residents of the island, and become instant friends.  They are a small tribe, several hundred, and are being bullied by a much larger tribe, the Bag-jagderags.  After some unsatisfactory inter-tribal exchanges, the latter attack the former and Long Arrow is wounded, but the conflict is resolved by Polynesia communicating with a flock of about a million black parrots who attack the Bag-jagderags, landing on their heads and pecking slices out of their ears, resulting in instant panic on the part of the aggressors.  Thus the war is won, and through the gentle offices of the doctor, the two tribes become friendly and cease hostilities.  Exploring the island further, the small party of animals and naturalists circle the island by boat and climb a latent volcano.  They find a giant slab of rock balanced on the edge of the caldera, and realize that it could fall in with a very slight tremor of the surrounding formation.  This leads to some speculation on why the temperature seems to have been decreasing ever since they arrived on the island, and they come to the conclusion that the island is floating south and will soon be in the land of the icebergs.  So Dr. D gets some porpoises to search for a pod of whales to push the island back into the tropic zone.

After moving North for a while, the doctor is elected chief of the island and during a celebration ceremony, a loud cheer arises from the united tribes consisting of thousands of islanders.  The resulting vibrations cause the slab of rock teetering on the edge of the volcanic crater to fall in and soon afterwards the people hear a loud whooshing sound and the island begins to sink.  Dr. Doolittle theorizes that the island was only floating because it was originally part of a continental shelf that broke off all in one piece and trapped a huge bubble of air underneath it as it sank.  So when the slab of rock hit the bottom of the crater it allowed all the air to escape and the island started descending.  But fortunately they were close enough to the South American mainland that it settled on the ocean bottom before being swallowed by the sea.

The doctor spends two years organizing and building a civilization for the united tribes, but begins to feel homesick.  Polynesia  plots to get him away and enlists the porpoises to find the Great Glass Sea-Snail, the only one of its kind in the world.  If they can convince the Snail to give them a ride home, they'll be able to leave the island.  So the plan is put into operation and the doctor, being reminded of the comforts of home, with hot cocoa and a fireplace, agrees to go home.  The giant Snail lifts up the edge of its shell, the travelers enter with suitable amounts of supplies, and they find themselves crawling along the bottom of the ocean, headed for Puddleby.  Since the Snail's shell is transparent, they can observe the vast deserts, mountains, caverns, and creatures along the way, and a fine time is had until their ultimate arrival at the Doctor's house.  Where they sit down in front of a cozy fire, drink cocoa and reminisce.

The first book was written to appeal to children:  rather simply, with easily comprehended descriptions and actions, but the second one was very much like any adventure tale of that era.  I read all these books when i was very young, about ten i think, and they eased my life and inspired my imagination in significant ways.  So, since i'n entering my second childhood anyway, i thought i'd reread the first couple of them and share....  They're excellent fodder for housebound children and adults alike and i hope they may be new to some and a pleasant reread for others...

Posted by mudpuddle at 1:44 PM