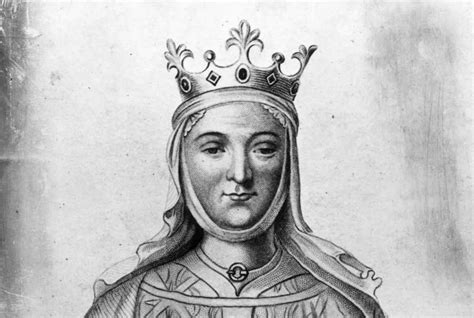 Eleanor of Aquitaine was probably born in 1122, although the date is not a certain one.  She was raised mostly by a religious order, receiving an excellent education to match her superior intellect.  She was fluent in French and Latin at least and later in English, undoubtedly.  In her late teens, she was slated to be married to Louis the King of France, but, being in love with young Richard de Vaux, she resisted until Richard was accidentally on purpose slain by a sword in the back.  After becoming the Queen of France, she had two daughters over the next few years, but was in disgrace through lack of producing a son and heir to the throne.  The Crusades were well underway by this point and Eleanor took part in the second one, acting as one of the leaders of the French contingent.  Unfortunately, while crossing the Phrygian Mountains in central Turkey, the segment of knights with whom she was traveling got too far ahead of the main army, which was attacked and seriously mauled by native Turks.  Eleanor was blamed, partly, for her part in agreeing to outdistance the rest of the army.  When the Crusaders reached Jerusalem at last, she was mildly ostracized from the leadership, and was thus unable to introduce a sane voice into the squabbling disagreements among the other commanders as to their next goal.  Unfortunately the lure of Damascan wealth was too much for the generals to resist and the army spent its strength and power uselessly in besieging that city's walls.

Soon afterwards, the European members of the force left by boat to return home.  Louis of France then divorced Eleanor ostensibly for not producing a son and not too long afterwards she became somewhat enamored of the Henry II, the Duke of Normandy.  They were married, and upon the death of King Stephen, he became the King of England.  The next few years were mainly taken up with uniting the kingdom under one ruler.  There were around 1100 separate baronies in the country at that time, and all of them spent their time and substance fighting with one another.  Henry succeeded in eliminating most of the petty infighting and through his superior resolve and with his seasoned armed force, managed to unite the country, more or less.

Henry was not a very loyal husband.  He had lots of mistresses and when one of them died, he accused his wife of poisoning her and sealed her up in Winchester Castle.  The real reason, probably, was actually because Eleanor wouldn't agree to allow Henry to depose her son Richard, who was at that time King of Aquitaine.  Henry wanted to remove Richard because he was too good of a tactician and also because he wanted his other son, John, the King of Ireland, to take his place.  The politics of that time were just as involved and contorted as they are today.Anyway, Eleanor spent the next fifteen years in durance vile, so-called, in a cold cell with minimum comforts and clothes.

Meanwhile, Henry had his own problems.  One of his best friends, Tom Beckett, a sort of Catholic functionary, had done very well in the priesthood and after many years, had been promoted to be Archbishop of Canterbury.  He was ambitious and wanted to spread Catholicism throughout the kingdom and be head of the entire business.  Henry didn't like this too much.  There's no evidence that he said, as Shakspeare would have it, "will nobody rid me of this turbulent priest?", but shortly after, Tom was found dead of multiple stab wounds.  Henry was not a person with very many limits on his personal behavior.  As Ms. Lofts stated once, "Henry's reaction to weakness is to stomp on it".

Henry finally died and Eleanor was released from her cell to become the reigning regent of England and Aquitaine for several years.  The book ends with her in charge and Richard once more in the Holy Land, trying to "free" Jerusalem.

The novel/history was well written.  There was a lot of invented dialogue, of course, but most of it seemed to mesh with the actual facts pretty well.  It was all in English of course, when people of the day actually spoke French or a version thereof - Aquitainian?  The ending was a little abrupt.  Eleanor lived for another twenty years or so.  She helped free her returning son from the prison in which he was incarcerated near the Danube, then moved back to her beloved Aquitaine, living peacefully until she passed away.  Back in England, Richard was about as pugnacious as his father, spending much of his energy and substance in wars with France.  He died in a small siege in that country at the early age of 41.  Richard, Eleanor, and Henry II are all interred in the same place:  the abbey of Fontrevault in France.

I liked this novel quite a bit even though it was a bit dated.  Ms. Lofts is a smooth writer, and this work blends the historical record nicely, logically segueing from one episode to another.  Sort of like lolling about in a canoe on a quiet lake in the sunshine, to be metaphorically extreme, haha...

Posted by mudpuddle at 3:41 PM