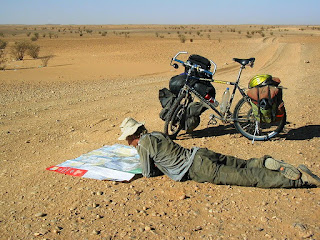 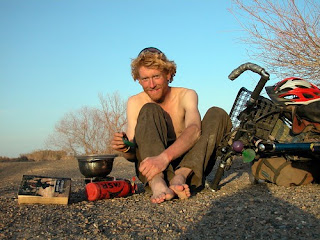 With a degree in Zoology and some post-grad work at Oxford, Alastair was feeling at loose ends so after due consideration he decided to bicycle around the world.  He was interested in social things:  mainly the oppression of the poor and the lack of education and necessities for children, so he became a sponsor/lecturer for the charitable organization, "Hope and Homes for Children", under which aegis he arranged with various organizations to give impromptu lectures in the countries he planned on traveling through.

He left his girl-friend, Sarah, and his family in the Yorkshire Dales in the spring of 2001 and began pedaling.  The first day he made 85 miles, demonstrating that he was in fairly good physical condition, and continued at that rate, more or less, crossing the channel and traversing the Benelux countries in the teeth of wind and rain.  It took him a while to establish a routine:  deciding where to camp and what to eat and how to deal with curious passersby.  Basically he just looked for a place out of sight of the road or local housing, that was flat and inconspicuous.  Before leaving he had planned on meeting a friend in Luxembourg, Chris, and the two looked forward to cycling along the Danube, through Slovakia and the rest of the Balkan states.

Slovakia was scenic but replete with rifle-bearing soldiers;  Hungary consisted of a vast plain devoted to agriculture, but with little of the grain being used to feed the poverty stricken populace.  They saw lots of crumbling factories and the cities were old and worn in appearance.  Romania featured giant above-ground pipelines running heedlessly through neighborhoods and fields, splitting up the country together with its culture.  More rusty and degrading factories, with lots of scrap iron and garbage decorating the landscape.

In Bulgaria, nodding at someone meant "no" and shaking the head meant "yes".  They crossed a range of mountains and successfully entered Turkey.  In Istanbul, Chris returned home and Alastair had to make a decision as to whether he should continue through Turkey to Pakistan, Russia and China, or whether should try the middle East instead.  The former would mean exposure to a fierce winter climate and to possibly hostile natives, as it was just after the 9/11 disaster in America, so he opted to take the second route, through Syria and Lebanon.  He was warned of the dangers proffered by these countries, but it still seemed the best way to go.

Pedaling along the Turkey coast, he received nothing but friendly welcomes from the villagers.  They would frequently invite him to eat or drink and tried to help him find the best or most scenic routes to follow.  He noted the unusual rock formations in Cappadocia:  cone-shaped pillars made of sandstone and houses and churches carved directly into the rock faces.  Continuing on over several grueling ascents-mountain ranges- he entered Syria without any trouble and found hospitality at an orange farm.  Later an old man shared his lunch of pita bread and cream cheese.  In Lebanon he grabbed onto the rear bumper of a cement truck grinding up a long hill and discovered a new way to get over some of the higher elevations.  He gave a lecture in Beirut and made some friends at the American University with whom he stayed for a week or so before resuming his course to Damascus.  He encountered more soldiers but they were not unfriendly, and he briefly visited some of the largest ancient Roman ruins in the Mediterranean area.  In Damascus, he became a bit disconsolate due to being lonely, and was on the verge of quitting his long trek.  He became trapped on a sort of emotional roller-coaster, missing Sarah and home, and fearful of what the future might hold.  After he saw a quote in a book, "searching for yourself you will always find demons", he began to realize that much of his unhappiness was due to trying to live the future before he got to it.  So he consciously started to try living his journey one day at a time.

He spent ten days in Jordan with some friends who had flown out to visit.  They floated around in the Dead Sea one day, were discouraged because of all the flies, but cheered themselves up with champagne.  Alastair noted the continual expressed hatred of Americans and Israelis by the Jordanians.  With another cycling buddy he visited Petra, the fortress city carved into the desert walls but abandoned centuries before, and continued on to brave hail storms and a fierce wind while traversing the Sinai desert.

In Cairo he was overwhelmed by beggars and vendors.  Urban sprawl had extended itself right up to the edges of the pyramids.  Cycling was not permitted along the Nile, so Alastair biked south along the Red Sea and was driven by truck to Luxor at the behest of the police.  He had to wait several days for a ferry to cross lake Nasser and was awestruck by the over-the-top dirtiness of the boat and it's egregious over-crowding.  Safely in Sudan, he progressed along dirt tracks for hundreds of miles, relating to and with the Sudanese people who were unfailingly polite and helpful.  They had a sort of dignity and kindly self-assurance that made them very civilized and likable.  So it was somewhat of a shock to encounter the Ethiopians who, immediately after he crossed the border, demonstrated a certain hostility and greed diametrically opposed to the demeanor of the Sudanese.  The children were the worst:  crowds of fifty to sixty of them would scream "YOU" and throw rocks at him while demanding money.  He was only rescued at one point by a local school teacher named Peter who offered a place to sleep and eat away from the little devils.  Alastair soon realized, though, that the anti-social actions were the result of severe poverty.  There was very little to eat and none of the so-called essentials familiar to other regions.  Even Peter was owed three months back pay;  he lived in a one room mud hut with a chair and a cot.  Later Alastair found out that all this was the result of corrupt government;  all the money was stolen by officials, none being allowed to improve the infrastructure or to feed the starving population.

Upon crossing several more vast mountain ranges, Alastair arrived in the southern part of the country, which he found entirely different.  There were efficient and viable farms, prosperous businesses, and well-fed and educated residents.  Presumably this was all the result of more effective and honest governance.  Another friend, Rob, joined the trek at this point, accompanying Alastair to lake Tana.  They pedaled down the sloping mountains and up again, making pretty good progress in spite of mechanical difficulties with Alastair's bike.  The frame had broken back in Sudan and had been welded back together twice by village artisans, and the rear derailleur was shot, only allowing a few gears to be used.  In Addis Ababa the Sheraton Hotel offered a prime example of culture shock.  Staying there was like being magically transported to Los Angeles;  sort of a magic carpet ride out of the groaning poverty surrounding the building.

Following local advice, Alastair joined another group of cyclists to cross Kenya, but they were all halted at the border and trucked down to Isiolo because of the threat of bandits.  But the Kenya they saw appeared prosperous and healthy with stores along the road and readily available food and services.  At one point, Specialized, the brand of bike Alastair was riding, sent him a new one so his progress improved markedly for a while.  He stayed for three weeks in Nairobi, visiting and partying and giving lectures.  In southern Kenya he was bemused by the invention and zaniness of some of the natives:  one was dressed like a bird while riding his bicycle;  other riders had decorated their bikes with horns, decals, emblems, and often carried enormous loads on them:  stacks of wood and mounds of produce;  even a washing machine on one.  Some indigenous entrepreneurs were making them out of wood and bamboo.  There were a few close shaves with maniacal bus drivers.

Alastair cycled through Tanzania, Malawi, Mozambique and Zimbabwe before reaching South Africa.  Most of those countries were doing pretty well except in Zimbabwe, which was in the process of being totally destroyed by the selfish despoliation of Robert Mugabe, involving killing all the animals and cutting all the trees and stealing all the money.  Entering South Africa was like coming home, as Alastair had worked there for a year after finishing college.  There were still lots of mountain ranges to cross, the last being the Drakenberg mountains, but finally, he found himself staring out over the ocean toward Antarctica at Cape Point, the southern-most spot on the continent.  The last part of the trip was made more eventful by mechanical troubles.  He had continual hassles with his derailleurs, lots and lots of flat tires and broken spokes.  He stated at one point that his bike weighed about fifty kilos, fully loaded.  That would be about 120 pounds:  incredible in my limited cycling experience;  i can't even imagine trying to pedal that weight up a mountain.

I enjoyed this book.  It was a bit more personal than i'm used to but it conveyed Alastair's impressions of the peoples and countries that he passed through quite well, i thought.  Since this account was written, Humphreys has completed his initial intention of cycling through South America, from Tierra del Fuego to Point Barrow Alaska, then across the Bering Strait to Siberia and down through China and across Asia to Europe and home.  I've ordered the second volume containing the rest of his trek and will be reporting on it in due time.  He also walked across India in his spare time.  I ordered that one also.  It will be interesting comparing it with my last post.
Posted by mudpuddle at 1:36 PM