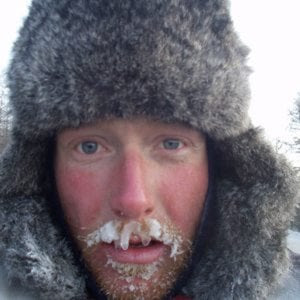 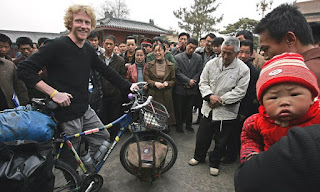 After nine months of strenuous pedaling Alastair found himself in Cartagena, on the edge of the Caribbean sea.  He'd been struggling with the idea of skipping the Darien Gap, one hundred miles of relatively unexplored jungle, full of antagonistic wildlife, revolutionaries and bandits of one stripe or another.  Finally, after becoming acquainted with Dale and Ed, two Americans who were lolling about the area in a 37" sailboat named the Hannah Rose, he decided to travel with them as a sort of super-numerary cook and bottle-washer while they visited fishing spots along the Panamanian coast and explored the tiny islands located in that region.  They saw dolphins, turtles, and sunfish and explored islets until they reached the Panama canal.  Passing through to the Pacific side of the isthmus, they sailed north to Zihuatanejo, a city on the same latitude as Mexico City, where Alastair left them to once more begin pedaling.  His first goal was to spend two weeks in the capital with some friends.  He noted that the city was sinking under the weight of 23 million people and the buildings constructed to house and employ them.  He gave some slide lectures and noted that there was lots of garbage lying around.

He didn't have a lot to say about cycling to Guadalajara, other than to express his disappointment on not being able to tour the Barranca del Cobre, the deepest canyon in the world situated between Los Mochis and Chihuahua.  He'd been riding along the coast for the most part until he was past Guadalajara, then he pointed himself inland, planning to cross the border at Nogales into Arizona.  Before he got half-way, though he began having troubles with his pedals, possibly because of the dust and sand in the Sonoran desert.  So he took them apart and removed all the ball bearings which improved things immensely until the pedals locked up and wouldn't turn at all.  Stopping in a tiny village, the local blacksmith sold him the ones from his own bicycle.  Bucking high winds and the extreme heat he made it to the U.S. at last and experienced a certain amount of culture-shock upon arriving in Phoenix and becoming lost in one of the largest shopping malls in the state.

The Grand Canyon beckoned and Alastair took a mini-vacation to go see it with another friend, and was suitably impressed.  While still in Phoenix he was interviewed by Fox News and asked them for a new bicycle as his was worn out.  A local church gave him one.  He also visited Tom Whittaker, originally from Seattle and famous for his mountaineering prowess before leaving the city.  For most of the way to Los Angeles he averaged 100 miles per day, pushing himself in his eagerness to see a lady friend and to get away from the constant heat and dirt.  He was stopped by the California Highway patrol for illegally riding a bike on the freeway, but when they left he did it anyway, as there wasn't any other way to cross the mountains.  Eventually he discovered a bike trail that led to the beach.  Taking some more time off, he enjoyed himself for a while and then took the coastal highway, U.S. 1, north.  He commented briefly on the beauties of the mountains and the ocean but didn't mention the up and down elevation variations common to that route. (I know about this first hand as i biked that road from Menlo Park to San Simeon in my teens).  It's a spectacular place even if it's geologically unstable.

He lectured for several days in San Francisco and then continued up the coast to the redwoods.  He viewed with disgust the tree that had a channel chopped through it to allow cars to go through, but loved camping amongst the giant trees all along the upper coastline.  Oregon received not much mention even though it has one of the most picturesque shores in the entire United States.

In Seattle he and a friend tried to climb Mt. Rainier but were forced down by the weather conditions.  So they ascended the South Winter Spire instead (i don't know what that was, aside from being cold and exposed).  As he entered Canada, his final analyses of America were that it demonstrated "consumerism gone crazy" and that it was pathetic how the average citizen ignored and was ignorant of the environment.  He was joined by friend Dave for the trek to White Horse.  They saw bears, deer, beaver, eagles, foxes and coyotes all along the way and marveled at the green mountains surrounding them.  Alastair also observed that the mosquitos in that area were the worst he'd seen in his whole trip.  For a short while Dave and he rode with a couple of other cyclists who were headed to Moscow in Russia.  They were traversing the Cassiar highway at the time, a road that leads all the way to the northern territories.  Upon their arrival at Whitehorse, they were informed that through passage was impossible due to extensive forest fires, so the two decided to travel by canoe along the Yukon river to Dawson.  They were informed by every person they consulted that that was also impossible because neither of the them knew anything about canoes and that there were fires there as well.  So, naturally, that's what they did.

They acquired a large one and put their bikes and gear into it and set off.  After a few hours of fumble-handed practice, they began to feel a bit more confident and blithely paddled their way to Lake LeBarge, the same lake that Service wrote a poem about.  Camping in primitive forests was delightful and they thoroughly enjoyed the trip until they reached the Five Finger rapids, which they had been warned about from the start.  Tying all the gear down, they pushed off and did pretty well keeping the front of the boat in front and evading the many rocks and shoals inhibiting their progress until, due to not being able to decide which of the five fingers to take, they capsized.  The current was so swift that they almost lost everything, but at the last opportunity they managed to push the soggy load into a sort of backwater created by a logjam that permitted them to drag their water-logged outfit on to the beach.  After a drying-out period, they continued on the next day to Dawson, where they followed the Top of the World Highway to Jack Wade, Alaska, and the Dalton Highway to Prudhoe Bay.  They pedaled over immense mountain ranges and crossed vast stretches of tundra.  A trucker gave them some freshly baked cookies.  After crossing the Brooks Mountain Range, the trees vanished and they traveled the rest of the way over the north slope to Dead Horse, near the Bay.  They took pictures of some other cyclists who had also arrived there from Ushaia.

They caught a ride to Fairbanks and rode their bikes to Anchorage.  Dave left and Alastair arranged for transportation to Magadan, Siberia on the Canmar Dynasty, an Indian cargo ship.

Once again my fingers are wearing out, so i'll finish the tale of this epic trip next time, through Siberia, China and points west...
Posted by mudpuddle at 1:55 PM