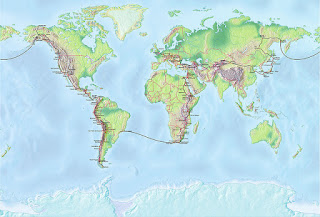 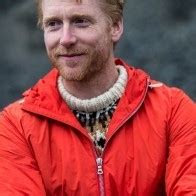 
After working odd jobs for six weeks at the Royal Cape Yacht Club in Capetown, Alastair was offered a free ride to Rio as a hand on a sailboat participating in the annual Cape to Rio sailboat race arranged every year in January.  He got sea-sick at first, but soon got used to the four hour on and off watches for the 4,000 kilometers to Brazil.  He was mainly employed on the 58 foot MAIDEN as cook and cleaner, although he learned to steer and maintain a course fairly quickly.  One of the crew got hit on the head at night by a flying fish, which he caught and fried in revenge.  The trip was completed in 24 days and the captain donated 50 pounds in aid of Alastair's world tour.  The money was used to get a haircut and to pay for a bus ticket to Ushaia, the southern-most town on the continent.

The route north began up the west coast and the highway meandered between Chile and Argentina, frequently crossing the border and avoiding much of the very mountainous terrain.  Fields of daisies and clover alternated with evergreen forests and crystal clear lakes for a long way.  The wind blew constantly from the north, cutting Alastair's speed down to 3 mph at times.  But after several weeks he reached O'Higgins lake and the Villa O'Higgins, both named after a general famous for aiding in establishing the Chilean nation.  At this juncture the 750 mile Carretera Austral highway began.  Cycling through scenic landscapes including snow covered mountains and wild rivers, Alastair discovered civilization after a while when he started riding through more-or-less degraded villages situated next to polluted rivers that blighted the topography somewhat.  He found the opportunity to give talks to a few grade schools, promoting environmental awareness and personal growth on a basic level.  The road continued along the coast for the most part and his bicycle (the same one he'd used in Africa) started to experience mechanical difficulties.  A couple of spokes broke, the derailleur was crankily consenting to operate in only a few gears and the rear wheel had a bad crack in it.  In spite of these troubles, Alastair and his bike made it to Santiago where he gave a few more lectures and had the bike looked at.

Another 55 kilometers of uphill pedaling through hairpin turns and tunnels resulted in him being escorted by the police (he wasn't legal in the tunnels) up to the altiplano, the high desert region of the southern Andes, which led to the city of Mendoza.  Taking a few days off, he enjoyed some of the cities and met some of the residents.  One of them, Fabien from France, volunteered to accompany him on his trek.  As the two biked through sand, dust and non-existent villages, feeding themselves with banana sandwiches and bland pasta, they gradually gained elevation until they reached 4,000 meters and the Salar, the high salt desert of Chile.  Riding through the flat terrain they saw flamingos and volcanoes as they fought the unrelenting headwind for ten days until they reached another border crossing back into Argentina.  The ensuing 80 kilometers took them up to 5,000 meters where the temperature at night dropped to 20 degrees below zero.  Entering Chile again.  Fabien had returned home at this point and Alastair proceeded alone, often pushing his bike due to sand and strong winds.  He did this for 45 kilometers one day.

At La Paz he was joined by an old friend, Rob, who flew out from England to travel with him.  On their way to Lake Titicaca, they cycled up and down 4300 meter passes and mountains, wearing themselves out with the high-altitude ascents and scaring themselves silly with the semi-controlled plunges into jungly valleys.  They experimented several times with truck-assisted climbs, latching onto slowly moving vehicles as they were passed, while ascending steep roads.  Dangerous, but a lot easier on the legs.  Truck-surfing, they called it.  A heady and overly-thrilling descent brought them to the town of Nazca after which they followed a comparatively benign coastal highway to Lima, where Rob went home.

Cycling along the Pan-American highway, Alastair rode through more tunnels, along the edges of steep cliffs, and continued his relations with the natives, talking, lecturing and thinking about the different and various sorts of reality he was encountering and reflecting on what it all meant.  Eventually he arrived at Ecuador where he noticed that Ecuadorian drivers were unequivocally the worst ones on the continent.  Talking to some of the inhabitants, he was informed that there was no way he was going to be able to bike through Colombia, much less the Darien Gap (100 miles of impenetrable jungle between Colombia and Panama) due to ongoing drug wars and revolutions permeating the country.  So when he reached the border, he camped and dithered for several days, before, rather unconsciously, just going ahead just in order to see what would happen.  In short order he met a bus that had just been held up at gunpoint.  But he continued on and discovered that Colombians were the friendliest and most accommodating people he had yet seen.  They fed him and insisted he spend nights with them and gave him provisions and advice about where he was headed as well as helping him with bike repairs and clothes washing.  The only trouble he had was with his brakes wearing out while traversing the beautiful, forested mountain passes.

He reached Cartagena at last, after 9 months on the road and was faced with the decision involving crossing to Panama.

How dealt with this dilemma will be described in my next post, along with other adventures on his global tour.  Stay tuned...
Posted by mudpuddle at 1:35 PM