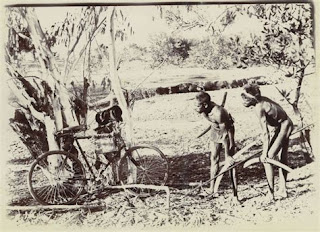 FROM OCEAN TO OCEAN ACROSS A CONTINENT ON A BICYCLE

"A vague longing to do something..."  is what inspired Jerome to plan a ride over some of the harshest country in the southern hemisphere.  Once he'd decided to actually do it, he looked around for quite a while for a bicycle that he thought could stand up to the trip.  He was under no illusions about the terrain:  Although not terribly mountainous, it consisted in large measure of seasonally dry lake beds and creeks.  Mud cracks, root holes, "gibbers" (loose rocks and boulders), mulga scrub and spear grass (up to twelve feet high with seeds that stabbed passers-by and burrowed into their skin).  Not to mention the ubiquitous millions of flies and mosquitos, or snakes by the dozen.  At length he bought an Electra.  Hugo Wertheim was the manufacturer, a piano producer and also a maker of sewing machines.  Murif didn't want to be a moving advertisement, though, so he removed the brand name and substituted "Diamond" in its place.

His intention was to travel lightly, as he meant to make full use of railroad and telegraph "stations" that dotted his planned route with some regularity.  That worked out quite well, and Jerome had to camp out in the wild a minimum number of times, mostly taking advantage of the open hospitality proffered, as a general rule, by the said stations.  In terms of setting the bicycle up for arduous conditions, he added extra rubber to the tires and carried enough neatsfoot oil to last the trip.  In those days, wheel hubs had small capped holes for oiling the wheel bearings;  this had to be done fairly often.  For his own luggage, he strapped several bags to the handle bars and carried a satchel over his shoulder for more immediate availability.

To begin with he bought a voucher book he planned on using to verify his mileage by gathering signatures from station managers, workers, ranchers and farmers.  The first person to sign was the Postmaster of Glenelg, near Adelaide.  Jerome wheeled his bike into the surf of the southern ocean, got the signature, told his landlady he wouldn't be home for tea, and left.  He biked fifty miles the first day, to Kapunda, noting in his diary the Flinders range on his right.  The road was clay mixed with "ironstone" and partly paved.  This fairly satisfactory surface only lasted for several hundred miles, though, and after that he had to wade creeks, dodge ten foot high ant hills, evade cracks up to 4" wide, suffer the constant attentions of millions of flies, and keep a sharp eye out for snakes.  He accidentally ran over a small snake - a mere 3 feet long - and had to pedal faster because it chased him.  His rate of pedaling was just about 62 gear inches.  This is a figure used in cycling to represent the rate of travel.  The number of teeth in the chain gear multiplied by the tire size, divided by the number of teeth in the rear cog, equals "gear inches".  (That's about what i have on my bike and i go about 12 mph @about 60 rpm).

One day he stopped to get a drink from a small water fall and slung his satchel over a nearby fence while doing so.  When he was finished he noticed a horse, obviously starved and tired, leaning against the fence post and trapping the bag.  Murif's description of the animal was a "barrel-hooped skeleton held together by rawhide".  He tried everything he could think of to get the horse to move with no luck.  He rode off about four miles then came back to see if the horse had shifted at all.  It hadn't and Jerome didn't mention whether he recovered the satchel or not.  Moving right along, head winds were a constant problem, occasionally stirring up dust storms that made track finding a major hassle.  Three cornered Jacks made life unpleasant:  they were thorns so structured that one of their points was directed upward however it happened to fall on the ground.  Because of thicker tires, these weren't normally a difficulty, but flats occurred occasionally even so.

Sometimes cycling wasn't in the cards.  Frequently the terrain was so rough and rocky, or wet and slimy, that he had to push the bike, or even carry it.  He finally reached Oodnadatta with eyes sore from fly attacks and pretty well worn out from pushing and carrying.  This was 688 miles from Adelaide.  He rested up for five days, then set off again.  Vast plains, sand flats and hills, stony tablelands all presented their individual hardships until Murif at last crossed into the Northern Territory at Charlotte Waters telegraph station.  After a short rest, he continued on through the intense heat (124 in the shade) and almost immediately got off on the wrong track and became lost.  And got stomach cramps from the heat, or possibly bad water.  Casting about, he got back on the right road and soldiered on.

He started seeing occasional natives, and was a bit alarmed at first, due to gossip about how dangerous they could be.  As it turned out, gossip is what the stories were, the aboriginal peoples being merely curious and helpful.  Meeting one of them in a desert, the spear carrier observed, "white feller riding big mosquito".

Acacia, mulga, spinifex, desert oak and loose sand hills made pedaling impossible sometimes.  Just before Depot Wells, he had to carry the bike for 15 miles, zig-zagging up and down red sand hills in the constant heat.  At Alice Springs, situated in a sort of hole in the MacDonnell mountains, he took a few days off before tackling the Todd, a sort of gap that penetrated the range and led into a wilder portion of the continent.  Here there were fewer stations and ranches, and not as many water holes.  His clothes were getting worn out.  "A torn garment called through the rent, for thread, and i gave it some".  He amused himself by playing tunes on the bicycle spokes.  Between Barron and Tennant creeks there were no ranches or stations for 160 miles, but Jerome decided to just starve for a bit and set out with just his water bag.  A friendly householder had given him a piece of cake that he was carrying in his hand and he accidentally dropped it while pedaling.  So he stopped and went back to find it.  Returning, he saw that his water bag had fallen over and leaked most of the liquid into the sand.  Disheartened but determined, he forged ahead anyway and ran into even more trouble.  He ran into an anthill (they are like concrete) and bruised himself badly but didn't damage Diamond.  Suffering from dire thirst, he fell into a water hole which held only salt water.  Pushing through red loam and heavy sand he reached The Devil's Marbles, a collection of giant granite blocks haphazardly strewn over the landscape.  He saw a monster lizard, not resembling any known reptile, and at last got himself lost again following a billabong (a dead-end branch of a creek).  Another 30 miles and he had the good fortune to meet two fence riders who gave him food and water.  They had a conversation about metempsychosis (soul migration):  perhaps an apt topic relating to his waterless experience.

Powell's Creek station marked the end of the wild country and at this point Murif began to sense victory.  He passed by Lake Woods, a body of water 90 miles in circumference and almost immediately was in jungle:  trees with trunks 30 feet around, and flowers of all sorts and hues.  Thick grass gave him some problems:  the bike would stand up in it without falling over.  But the end was rapidly approaching.  A series of long rides led into Palmerston, near Darwin, the effective end of the trip.  The Palmerston Cycling Club met him 2.5 miles out of town and cheered him all the way to the ocean, where he rode into the surf, having completed over 2000 miles of extremely difficult country.  In his final analysis, the only comment Jerome made that was recorded, was that his excellent bike had not even broken one spoke on the whole journey.

This was another remarkable adventure by an extraordinary human being.  The book was conversational, humorous in a way that i took to be typically Australian, and well written.  I had the feeling that if Murif had known beforehand how hard it was going to be he might not have done it.  But it was a superb accomplishment and he deserved all the recognition he got.  Later, he held various positions in Australia until he migrated to America, where he spent the balance of his life in the Bay Area.  He died and was buried in San Mateo, near where i used to live...

Posted by mudpuddle at 3:46 PM