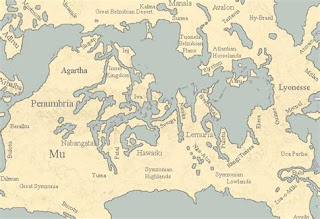 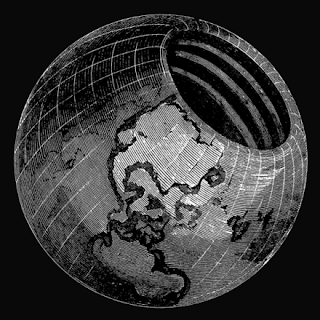 SYMZONIA:  A VOYAGE OF DISCOVERY

The beginning of the 19th century was a time of increasing general interest in scientific phenomena.  All sorts of innocent and occasionally weird theories arose, among which was the one about a hollow earth.  John Symmes was rather taken away by the thought and wrote articles and one novel describing and explaining how such a geological curiousity had come about, and what it was actually like down there.

Captain Seaborn, hired to lead the expedition, had a 400 ton ship built, with which he intended to sail through the Antarctic seas to the inner earth.  The vessel was steam-powered but was also equipped with masts and sails.  The driving force was via mechanically operated paddles that protruded through the ship's sides at an angle.  They were designed to be retractable in hazardous situations, as in plowing through heavy ice.  After obtaining a crew, he set out on August 1, 1817, the initial destination being the Falkland Islands.  This archipelago (over 400 islands) was portrayed as having a mild climate which supported hogs and goats, being covered with tussock grass, an ideal fodder.  Penguins were abundant and Seaborn and his crew admired the towns the animals had built for themselves, with neatly designed streets and house-like nests arranged  just like city blocks.  They seemed to have an active social life, and an organized political structure that could only (according to Seaborn's observations) have originated from a civilization inside the earth.  Approaching South Georgia, the Captain also explained why the South Pole must be free of ice, citing refracted sunlight and the seven months of sunshine lasting 24 hours a day.

Not all of the crew were sanguine about this theory, and one of them, Slim, fomenting rebellion, led them in a mutiny.  But Captain Seaborn managed to convince them that if nothing else, they would find lots of seals to harvest which would make them rich.  They continued on and soon found land and a large harbor.  Dropping anchor, they explored the vicinity a bit and were surprised upon returning to the ship to find it sitting on dry land.  Soon after, however, a tidal bore was seen approaching which lifted the vessel 80 feet.  They were pushed up a nearby river for fifty miles into an old growth forest and discovered, after debarking,  a number of mammoth bones lying around.  Later a live one appeared and encouraged them to regain the ship.  Returning to the bay, some of the crew set up permanent house-keeping and planned on spending the winter hunting for seals.  The rest of the contingent continued on toward the south, but soon ran into an ice barrier along the edge of which they traveled until they came upon a gap which provided access to the interior.  The ice was apparently a sort of girdle that surrounded the South Pole, and was (according to the Captain) created by the condensation of warm air emanating from the inside of the planet meeting the cold air common to the polar region.

The Captain and his crew resumed sailing but after a short period noticed that the compass was now pointing north.  After five days they veered to the east for another seven days after which they sighted land.  A ship with five masts and narrow sails appeared and after a short exchange, the two vessels entered another harbor behind an island (sort of like the relation which the Isle of Wight bears to the English mainland).  The new arrivals saw a land of rolling hills, cows, green with tussock grass and trees with snow covered mountains in the background.  Captain Seaborn landed by himself and was conducted to a large white building, resembling in part a sort of ancient Greek temple.  He met a short man who bowed and sat on his feet like an East Indian and they attempted to communicate.  Over several weeks, Seaborn became familiar with their language, but the little person has already learned English.  They are, evidently, extremely intelligent.

Seaborn is invited by Surui (his teacher's name) to a Senate session to see how the government operates in the new country.  Leaving the crew and ship behind, they travel up the local river about 100 miles.  In the distance is seen the Auditory, a building 750 feet high, made of stone on top of a hill.  It's supported by massive columns, and the hill has been dug away and the resulting cavity has been converted into an arena with benches placed on the sloping embankment so that the entire structure resembled a football stadium.  Surui and Seaborn enter the establishment along with thousands of natives and they listen to a concert played by a 500 piece orchestra.  Afterwards, the Best Man (equivalent to a president) sits in a swivel chair and deals with issues brought up by the audience.

Later, Seaborn meets with the Best Man in person, and they discuss various subjects.  At first the natives had mistaken Seaborn for an escapee from the north part of the country, near our North Pole, a kind of penal colony established for the rare disaffected and violent persons who cannot live in society.  In fact, after some deliberation, the Best Man believes that the inhabitants of the exterior of the planet originated from prisoners migrating through the hole at the north end of the planet to populate the outside of it.  Seaborn attempts to justify his own civilization but without much luck.  He teaches them about books and printing, these being the sole benefits the locals value from the strange visitor.  The "internals" are universally peaceful and quiet, eschewing alcohol and drugs of any sort and are not ambitious or greedy.  They believe that "Usefulness is the test of value", being basically Utilitarians.  Their clothes are all made out of a cobwebs harvested from a large local spider.

But Seaborn does discover that long ago there had been war between two segments of the internal civilization.  The Belzubians had invaded from the east and had been defeated by a weapon developed by the defenders:  a sort of very large blimp attached to an enormous flame thrower that was capable of burning up whole armies at a time.  At the mere appearance of this engine, the enemy fled and peace had reigned ever since.

After the Best Man had read some of the books that Seaborn had donated to the internals, they expelled him and his crew because they came to believe that the externals were "pestiferous beings spreading moral disease and contamination".  So, back at the ship, the explorers retraced their voyage and sailed back to the island where the remnant of the crew had stayed for the winter.  Discarding some of the supplies to make room for more seal skins (100,000 of them), the expedition  sailed for the nearest commercial port.  They sold the skins and bought products that were in demand in America, and set off to cross the Pacific ocean.  Caught in an enormous hurricane, they lost most of their cargo and the materials that Seaborn had brought from the internal world, but managed to arrive safely home.  The remaining materials were entrusted to an agent, a Mr. Slippery, who stole all the money, and Captain Seaborn was forced into dire poverty and wrote this book to recoup his losses.

This was an occasionally unintentionally funny book, and also somewhat grim in representing the attitude of the characters as regards killing and conservation.  It was more than evident that attitudes toward natural preservation were a lot different then than they are now.  I'd guess that this work was more widely known at the time;  probably read by Mr. Verne, i'd suspect, and possibly other authors dabbling in descriptions of fantasy worlds.  Certainly the subject of internal civilizations has been utilized by quite a few writers ever since:  Burroughs, C.S. Lewis (Perelandra), etc.  I've been sort of looking for more;  time will tell if i succeed, haha...
Posted by mudpuddle at 11:10 AM