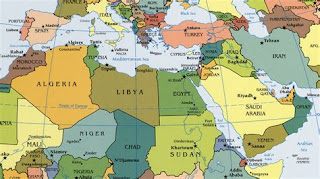 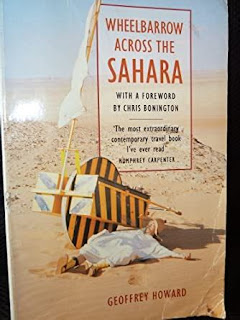 WHEELBARROW ACROSS THE SAHARA

Geoff and his wife Joan spent a year in Nigeria just after they were married.  They were both members of a religious society and they taught in a small school located in northern Nigeria.  After mulling over the question of how to help the poverty- stricken natives, Geoff came up with the idea of crossing the Sahara on foot without dependence on outside assistance in order to drum up some publicity and financial aid to help them.  He did some experimentation and came to the conclusion that a Chinese wheelbarrow, with a mast and sail, would be ideal for the set of problems that he anticipated.

Securing support from corporations, societies and businesses occupied much of his spare time for two years.  He wrote 1500 letters to equipment providers, corporations, businesses and societies of all sorts and finally, in 1974 he was ready to go.  The British Special Air Service provided support in the form of two soldiers who were to accompany him with a Land Rover.  Mick and Paddy were experienced mechanics and campers and their role was to supply protection and infrastructural support.  They were there in case Geoff needed rescuing, basically, and to facilitate repairs on the wheelbarrow.  Geoff had trained for the trip, running and practicing with the wheelbarrow on the beach.  He hoped to make the trek without ancillary assistance, relying on the storage capacity of the machine and the occasional village or town to provide water and food.

Taking ship to Tangier, Algeria, they drove to Algeria, apprehensively dealing with border guards and patrolling soldiers.  At the actual border crossing they bribed the local official with two cans of beer.  They had to drive south to the starting point, Beni Abbas.  They traveled mainly at night to evade official notice.  On Christmas Eve, they drank to a successful endeavour.  Leaving early in the morning on Christmas Day, Geoff managed to shove the wheelbarrow for 13 miles before he was totally exhausted.  And this was on a paved road.  Only one of the unanticipated difficulties was the wind.  Surges and gusts tended to blow against the barrow and, since it was loaded with 2 to 3 hundred pounds of gear, it required a lot of strength to keep it on a level roll.  And any irregularities in the surface were magnified as the vibrations were transferred through the hand bars to the operators body.  No shock absorbers.

Geoff gradually got used to the unaccustomed exertion and by the time the pavement ended in two hundred miles, he was coping fairly well.  His routine involved cooking his own food and doing his own cleaning and camp regimen;  at the end of the day he was commonly exhausted and as a result had frequent trouble with some of his equipment.  The stove in particular seemed to plug up with sand a lot.  It was only several hundred miles later that he found that a piece of fabric was partially impeding gas flow to the burner.  Later in the trip, due to a bad gasket, it was responsible for burning Geoff's tent and almost Geoff himself.  But most of his trouble lay with the terrain he was covering.  There were sand pits and ruts across the road which seemed, more often than not, to jerk the barrow out of his hands and dump it on the ground.  Lifting it back up was increasingly strenuous as he lost energy during the day.  The sand pits acted like unannounced brakes, and jarred him painfully when he ran into one and the bars were wrenched out of his grasp.  Additionally, the barrow would get often stuck in a rut or pothole and sometimes Geoff had to twist the machine around and pull it out inch by inch.

He was drinking up to twenty pints of water a day and never had enough to eat.  Since there was no spare water, he couldn't bathe, and consequently attracted flies, which he pretty quickly got used to, as they covered his exposed face and neck.  Diarrhoea was a constant problem, probably related to not being able to wash the dishes very well if at all.  After 4 to 500 miles the wheel started to wear out.  The rim was made out of aluminum and seated in a kind of foam mesh that began to deteriorate, so that the rim itself started wobbling and became damaged as a result.  Luckily, there was a spare wheel in the Rover, which either Mick or Paddy swapped out with the worn out one, but fairly soon it began to give trouble as well.  The rim on the second wheel was supported with spokes, like a bicycle wheel,  and they weren't strong enough to resist the lateral and vertical forces that the poor contraption had to deal with.

But they coped, one way or another.  The daily routine involved the two soldiers driving ahead to a suitable camping spot and waiting for Geoff to catch up with them.  If he was delayed, they'd go back and help him.  Theoretically, Geoff wasn't supposed to accept any help, but that rule soon went by the wayside, and the heat and mechanical breakdowns demanded that all three co-operate just in order to survive.  Mud villages were fairly common along the route, and passersby were also frequent.  The principal law of the desert seemed to be that all travelers, regardless of nationality or origin, helped each other with food, water, or assistance whenever required.  Things progressed fairly well until they reached the Niger border, where the road got a lot worse.  Part of it was deep sand that strained Geoff's muscles to the utmost.  Sometimes the mountains he encountered drove him to tears.  To make matters harder, a species of very small sharp thorn, apparently ubiquitously distributed over their route, made life a misery for walkers and vehicle tires.

They had several days of rest at Tamanrasset, but they were constrained by a deadline to hurry as much as they could, because they didn't want to be caught traveling in the summer time.  As it was , the temperature reached 110 degrees in central Niger.  But Geoff got stronger as time went on.  One day he managed to cover 30 miles in spite of sand holes and ruts that made for grueling progress.  Finally after 2000 miles, they reached their destination, Kano in north Nigeria.  When they crossed into the latter country, Mick and Paddy weren't allowed to cross because the officers back in England had neglected to forward the requisite visas.  So Geoff went on alone, but soon made friends with various tourist types who gave him a lot of assistance, both physical and moral.  When he reached Kano, he trundled along toward the airport where he had arranged to meet his wife, who was flying in from England.  But before he got there, he saw a figure in the distance whom he at first thought was another native, but soon realized it was Mrs. Howard.  Ecstatic reunion.

Geoff went back to his job as Reverend in Salford, England, where he stayed right up until the present day, apparently.  This was a most amazing story.  Mr. Howard displayed more grit and guts than any explorer i've ever heard of;  the daily pain and exertion would have killed or discouraged almost any other person attempting such a feat.  It was at times painful reading about the hardships, quandaries, and dilemmas the small group managed to deal with daily.  The writing was standard English prose, very readable and clear, and, if anything, understated the horrors that they faced every day.  I'd read this book again if I hadn't already read it. Maybe i will anyway.  Excellent and inspiring...

Posted by mudpuddle at 2:38 PM