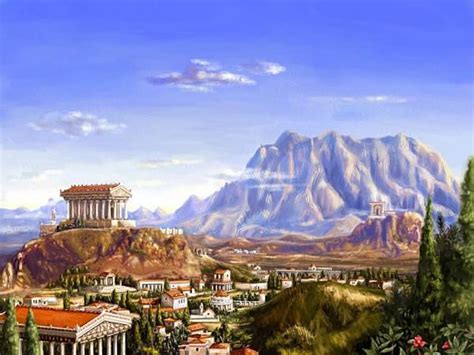 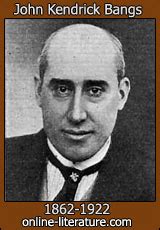 Pursuing his employment as a war correspondent, Mr. Bangs found himself camped at the foot of Mt. Olympus after several days touring with a native guide.  The guide (Hippopopolus by name) was an irritable sort whose negative qualities began to display themselves after a 43 kilometer walk in search of printable data concerning the ongoing conflict between Turkey and Greece.  The two converse about the Gods and Hippopopolus has not much good to say about them.  After a makeshift dinner of sardines and toast, he referred to Mercury as a stock market grifter and criticized Apollo's attempts at music making as "not rare, but raw - awful".  During the night, while Mr. B was asleep, Mr. H managed to abscond with his employers wallet, watch, and overcoat.  Awaking in the early dawn, wet and cold, Bangs began walking back toward the local village, but he got turned around and after a couple of hours found himself in front of a cave, half-way up the mountain.  He entered and fell asleep again and several more hours elapsed until he woke once more due to a faint light shining from the back of the cave.  Investigating, he noticed a sort of door apparently incised into the wall with a button beside it.  Pressing said button a light came on above the door and it soon opened.  Bangs, startled, said, "My heart sank into my boots but as these were wet, it promptly returned to my throat...".  A dark figure with brilliantined hair dashed out of the revealed cavity and a small naked person invited him inside.  The door closed and the elevator soared upward.  A few exchanges in Classic Greek told Bangs that his fellow conversant was none other than Cupid.  The little operator was a chatty kind of Being, who shared some information about Zeus, his employer:  that he'd been more or less ignored by his parents, Mr. and Mrs. Cronos and in consequence had grown into a rather unpredictable and scatter-brained leader.  Cupid's parents, Venus and Psyche, had kicked him out of the house at an early age which was why he ran an elevator for a living.  He was unable to improve his situation due to the influences of Mammon and Greed, who undermined his credibility with the general public.

Reaching the top story, Hebe showed Mr. Bangs to his room, which was a very nice one with magnifying glass windows that permitted extensive views of the city of Olympus as well as vast prospects of the solar system and surrounding galaxies.  In the morning, Adonis appeared in his position as hotel valet and helped Bangs into his new toga, arranging and draping it according to accepted divine practice.  Adonis, talkative fellow, said he was only temporarily employed, as he had to spend half the year in Hades, where he had a nice apartment.  After breakfast, Bangs ventured outdoors and met Phaeton who was in charge of rapid transit.  Ankle wings were popular but neophyte users had difficulty keeping themselves upright, tending to flip over in mid-flight with resulting contusions to the head and face.  Bicycles were also available:  the tires were filled a special gas that allowed them to float, greatly relieving the pedaler from excessive exertion.  In fact they were one way to reach the planet Mars, as it was well within cycling distance, being at perihelion, only five minutes away by bike.  There was a golf course there,  eighteen holes, each of which was some thousands of miles long.  Playing the entire course would take one around the planet several times.  Before doing anything, Mr. B asked to see a doctor, as he was suffering from post-breakfast stomach cramps.  He was led to the office of Dr. Aesculapius whose motto was:  "onmes homines mendaces sunt" (all men lie).  His office hours were anytime for mortals, but 10-12 on Tuesday for gods.  He used X-ray glasses to stare into people vitals.  He offered to operate on B's imagination if he was having trouble obsessing about anything.  But he finally offered several digestive tablets and suggested B call him in the morning.

Mr. Bangs visited the zoo.  He saw the Trojan horse inside which he could have taken a trip around the premises, but decided against it because of the possibilities of mortal sea-sickness.  The Cardiff Giant was lurking about somewhere:  he was shy because he wasn't supposed to exist.  The Prometheus vulture was in hiding because he was tired of eating the same thing day after day.  Some of the other gods and goddessses were there in different forms.  Callisto was a bear, Actaeon was a "Holy Terror", Dryope was a lotus, etc.  St. George's dragon was present:  his name was Fido and he helped with the annual fireworks celebrations.  He was expensive to keep around as he ate ten tons of coal and drank sixteen gallons of kerosene a day.  The Phoenix had its ash nest nearby.  It resembled a spun dry buzzard with a voice like a fog horn and demanded its bed to be lit every day.

After the zoo, a regiment of Amazons escorted Mr. B to visit the boss, Jove as he preferred to be called.  They passed gardens and palaces of gold and jewelry, onyx and opal, and traversed an eight mile corridor to the divine gates.  Entering, Bangs thought for a bit that he'd been misdirected, because the room he found himself in was littered with odd bits of machinery and tools tossed haphazardly around.  Work benches were filled with partially disassembled gadgets, and an older man, dressed somewhat sloppily, greeted him in a friendly manner and offered a tour of the palace.  They saw a sports arena sixty square miles in area, with a track and a soccer field.  The teams that usually played were Hades Vs. Olympus.  There were foot races periodically scheduled between various divine-like figures:  Alexander, Napolean, Julius caesar, Hannibal and others.  Hercules almost always won, mainly because the others couldn't resist posing for the audiences.  Jove participated once, but was irritated upon not coming in first, so he turned Hercules into a weeping willow for 500 years.  Night games were illuminated by great balls of fire.

Back at the hotel, Mercury arrives in a "Skitomobile" which is a sort of space ship used in interstellar travel.  Mr. B steps in and they take off, leaving orbit and careening around the solar system at unheard of rates of speed, taking full advantage of the lack of gravity to perform all sorts of aviational tricks and stunts: loop the loops, meteoric slides, and the like.  On Mars, they join Jove, Phaeton, and Jason for a game of golf.  Bangs noticed that what had appeared to be canals back on Earth, were actually bunkers filled with sand, and the dark green spots some astronomers had spotted were actually the putting greens.  The golf clubs were a version of a cannon, with a hole for pushing in the golf balls and a trigger to initiate action.  The balls themselves were made of coiled up electricity.  Bangs was overly enthusiastic with his first drive and his ball circled the planet and struck him in the back of his head.  Jove explained that a proper drive resulted in a zig-zag path in which the ball gradually approached the green in a sideways fashion to avoid divots.  But, without meaning to, B accidentally hit the Skitomobile and broke it instead of following Jove's instructions.  The latter became upset and cancelled the game and they all returned to Olympus.  Jove invited B to dinner and afterwards made him a god:  Zero, god of Nit.  The new god became a little carried away with his new-found abilities and without permission, used the Future machine to see what happens to mankind in the next few thousand years.  Jove in irritation, erased his memory and sent him back to Earth.  He woke up in his bed in Des Moines with a headache.

This is a very funny and imaginative book.  Bangs wrote others like it, The House-Boat on the Styx for instance.  His output was over fifty volumes, almost all of which are unavailable now.  His ability to instill almost terminal laughter in his readers is, imo of course, unparalleled.  I wonder if he was an influence of any sort on Wodehouse, as his type of humor, being sort of a crazed antilogical lunacy might have inspired the former's more methodical plot structures.  Where Bangs is out-of-the-box hilarious, Wodehouse prefers to build up his ludicrous situations bit by bit, slowly overwhelming the reader with the sheer nuttiness of his plots.  It least it seems that way to me.  Whatever, if any of Bangs' books cross your path, snatch them up, is my advice.  They will permit the reader to escape turgid reality for awhile...

Posted by mudpuddle at 2:02 PM