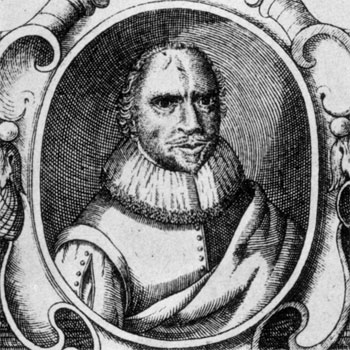 THE PENNYLES PILGRIMAGE, or THE MONEY-LESS PERAMBULATION OF JOHN TAYLOR FROM LONDON TO EDINBURGH AND BACK

In 1618 Mr. Taylor left London on July 14, beginning what he claimed to be a walking trip to Scotland and back.  He took a horse along, but apparently used it just to carry his personal effects.  And he had some money, he just said he didn't use any of it.  He was popularly known as the "Water-Poet", because of his attempt, which he stated was successful, to row 40 miles down the Thames in a paper canoe.  He cheated a bit, though, as he took along nine bladders filled with air for additional support in case his vessel sprang a leak.  Which it did, the bottom falling out after several miles.  Anyway, the first day of walking saw him arriving at The Saracen's Head in Islington.  As was to be his normal means of monetary support, he got one of his friends to foot the bill.  He must have been a personable sort of man, because he had friends all along his route.  Frequently he'd stay at one of their manors for a short period, and accept the services of a guide to the next patron's residence.  The first few days of walking were difficult, due to sore legs.  He said, "My legs I made my oars and rowed by land".

Life wasn't always predictable, however.  Suffering from sore feet on his way to Daventry, he was looking forward to enjoying a jug of beer supposedly left for his refreshment by the local land-owner, but when he got there he found that interested parties had drank it.  Occasionally waxing poetic, he described a night in a field as a bed of soft rushes with a star-studded ceiling for a roof.  On the way north, he traveled on the west side of the Pennine mountains, thus passing through Coventry, Manchester, and Carlisle, then over the Highlands to Edinburgh.  By the time he reached Manchester, he had had to have his horse reshod twice, for some reason;  maybe the first blacksmith didn't do a very good job, as he wasn't getting paid for his work...  Beyond Carlisle it rained a lot and that made the river crossings somewhat dicey.  In Lancaster he was jailed for two days at his own request, just to stay out of the perpetual rain.  Finally reaching Sir John Dalston's estate near the Scottish border, he stayed long enough to dry out, and then, with a guide, waded a quarter mile across the river Esk.  Scotland he found to be somewhat lacking in the nature of its creature comforts.  At one primitive croft he stayed at, the owners insisted on him sleeping in the single bed in the establishment.  The experience introduced him to "Irish mosquitos" (bedbugs).  The guide that was along with him slept on the floor and a pigeon resident in the rafters relieved itself on his face.  In the morning they walked 21 miles to Blythe, wallowing across the Annan river in the process.

His legs were even more sore by the time he arrived at Edinburgh, and he was grateful to fall into the hands of some of his friends.  He toured Arthur's Seat while he was there.  There was a cannon mounted on the upper deck that was so large in diameter that he could crawl into the bore.  He said his companion did also, at the same time, but it was a tight fit.  It had been used to shoot fire balls at the enemy.  Taylor stayed with the Lord of Leith for a while and was happy that the noble gave him eleven shillings.  While staying with the Earl of Culross, the owner talked him into touring his coal mine.  They got into a boat and paddled out to a tower protruding from the sea.  Climbing up and into it, they descended down below the sea bottom into a tunnel that was a mile long and was lit with torches.  Water seeped in through the oozy ceiling and there was a sort of semi-automatic bucket chain to get rid of the excess.  Taylor said he was glad to leave.

Later, he spent time with several of the Lairds in the Highlands, observing their hunting parties and social gatherings.  The former were arranged to suit crowds of a hundred or more members of the nobility and their retainers.  Shooting parties were shepherded up into a previously selected locale, usually a valley or glen, where villeins had rounded up herds of red deer for the pleasure of their masters who would bang away at them, killing a hundred or more as a rule.  Then the party would return to camp and eat too much and get drunk.  On the way back to Edinburgh, Taylor met the playwright Ben Jonson at Leith.  Jonson was on a trip to visit some of his relatives, and also to drum up some support, probably monetary, from some of his admirers.  Taylor spent quite a bit of time with James Acmooty, the owner of Bass Island, and when James offered to accompany him on his way back to London, he accepted the generous offer.  So the return trip was made considerably less arduous than the previous section had been.  Basically they traveled from one castle to another, with predictable aid and resources each step of the way, arriving in the Capitol on October 15.

This account was written in a rather messy iambic pentameter to begin with, but soon degraded into a kind of doggerel short hand.  Not that it wasn't pretty interesting, especially when Taylor was describing some of the events he was involved with, but the traveling itself was pretty much left to the readers imagination.  Taylor was a popular person in the urban culture of the time, and he knew most of the artistic personages that lived in London, including Shakspeare, Jonson, and many others.  His account of his walk is worth reading, if only because it pretty effectively imparts the social atmosphere of that time and location.  I definitely got the impression that artists of all types, poets and playwrights in particular, could be pretty rowdy.  But it was strange, i thought, that Taylor never said why, exactly, he was trying to do the walk without money.  Maybe it was just a publicity stunt, exactly the sort of thing one would expect that sort of personality to dream up...

Posted by mudpuddle at 4:31 PM