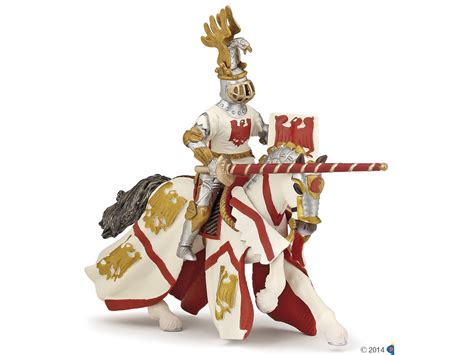 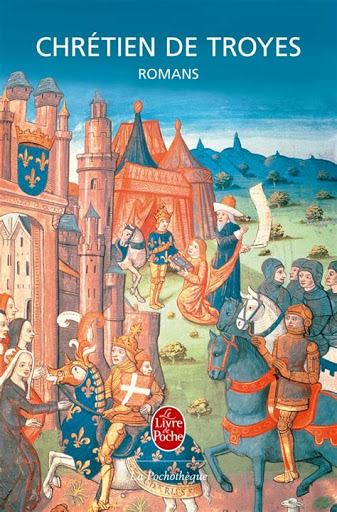 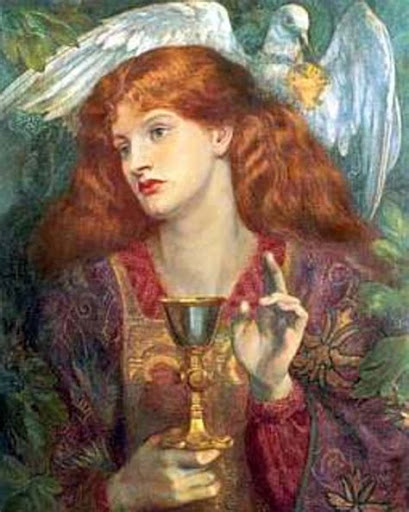 THE HIGH HISTORY OF THE HOLY GRAAL
Unknown in part and continued by Chretien de Troyes c. 1200 A.D.
Trans. by Sebastian Evans
Flavius Josephus was the name of the guard that removed the body of Jesus from the cross, kept the spear he was stabbed with, as well as the cup with a bit of his blood.  Instead of flinging the body into the street like Herod told him to, he carried it away from the city and privately entombed it, where it was later revived by Mary.  Joseph was fired for disobedience and moved to Britain where he founded a dynasty comprised, eventually, of knights and ladies representing the upper classes.  This account describes the adventures and disasters relating to King Arthur and his courtly supporters, Gawain, Lancelot, and Perceval.  These three, as well as many of their associates, are all descendants of Joseph, hence are all related to each other.  The knights do a lot of wandering around in the woods and forests of Britain and elsewhere, rescuing damsels and punishing evil-doers, all in the name of Christianity.  King Fisherman lives on an island in which the Holy Grail is ensconced along with the lance Joseph brought from Palestine.  The Grail (Graal) is a holy object of veneration, capable of banishing evil and replacing it with good, all in the name of God, the superior being.  The only knight (Gawain) to have actually seen the Graal forgot the magic words that needed to be uttered in order for it to perform its enlightening function and he spends most of his time worrying about it while slaying bad knights and righting wrongs.  King Fisherman is permanently depressed because of Gawain's (his nephew) forgetfulness.
There are other cross-currents.  Various and sundry rulers in other parts of the country, greedy for land and riches, are continually invading Arthur's kingdom and the three knights are more or less permanently occupied in squelching the interlopers' ambitions.  A kind of literary tapestry is woven throughout the long tale, with the same major and minor characters assuming different roles as time passes.  It is very much like watching a long soap opera series on television, and i suppose the stories performed the same sort of role in the medieval period.
Perceval is the principle character in the book, as he is regarded as the Perfect Knight, the one most likely to fulfill the attainment of the Holy Graal.  Lancelot is always sad because of his love for Arthur's wife, Guinevere.  Gawain is kept pretty busy running around keeping his relatives out of trouble.
There's a lot of decapitation in the book, such that the reader begins to wonder if that was a reflection of every day life in the 13th century.  For instance, Arthur's son, Lohot, is killed by Sir Kay, Arthur's seneschal, either by accident or on purpose.  Lohot had slain a giant that was oppressing the peasants and, being weary, for some reason took a nap while lying on top of him.  Kay happens along and sees the two and for some reason cuts off Lohot's head as well as the giant's.  He tries to keep it secret for awhile but Arthur finds out and Kay flees the country.  He returns later, though, in company with Briant of the Isles, as they plan on decimating and occupying part of the Kingdom.  There is a lot of ecological destruction in the book, as the thought of preserving the land for their own uses apparently never occurred to them.
The start of most of the action begins, like Sir Gawain and the Green Knight does, with a feast at court being interrupted by, in this case, a bald damsel with her arm tucked under her chin, riding in a cart followed by two other servant ladies.  She cries for assistance  and gets it immediately, which starts a whole series of rescues, jousts, tournaments, battles, carnivals, sea voyages, and extensive traveling, even to foreign countries.  Magic is not absent, and mysterious forces aid the heroes in their difficulties, illuminating dark dungeons, strengthening failing sword arms, moving sailboats in preferred directions and the like.
Perceval retires at the end of the book, married and happily living the latter part of his life as an agricultural overseer.  His wife passes on and he gently fades away.  But also at the end, Britain is about to be invaded once again and things look dire for Arthur, Lancelot and Gawain.  According to some sources there was in existence a second volume in the series called the "Quest of the Holy Grail" but i haven't found a copy of that yet.
This was a very interesting book in some ways in spite of being rather gory and repetitive.  When i was very young i loved reading about King Arthur and his Knights of the Round Table and i suppose this book was in some way a continuation of that.  I can't say it was an easy read, because it was couched in more or less Elizabethan argot, but, as i've found with other old books like Chaucer, Langland and Lydgate, it gets easier the more you read it.  I'd love to read Arcadia (Sir Phillip Sydney) next, but I don't know if i have the energy;  i'll give it a try, i think, in which case it will be several weeks before i post on it as it's quite lengthy...
Posted by mudpuddle at 1:24 PM