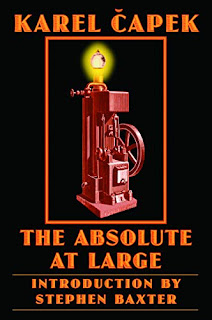 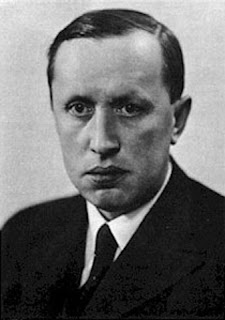 In an imaginary 1943, C.H. Bondy has succeeded almost beyond his wildest dreams.  He owns the Bondy Metallo-Electric Company which is doing well, but Bondy is looking forward.  There is currently a coal crisis in the country and new sources of power are desperately needed.  So he's interested in inventions and in exploring innovative uses of natural resources.  While investigating various areas of research he learns about an old school friend, R. Marek, who apparently has discovered or invented a machine that has interesting possibilities.  The two get together and Marek, evidently on the verge of bankruptcy, invites Bondy to visit his factory, where the machine he's invented is located in the basement.  Arriving at the plant, Bondy walks down the stairs alone, as Marek seems highly nervous and apprehensive about something.  A large copper cylinder is sitting by itself in the middle of a broad concrete floor.  There's a light bulb on top of the cylinder and attached to it is a massive flywheel.  The bulb is lit and the flywheel is slowly revolving.  After a while, Bondy begins to feel slightly giddy and euphoric.  Light-headed and somewhat ecstatic, he returns to where Marek is anxiously waiting and asks for an explanation.

Marek says that he's discovered a technique for the total release and utilization of quantum energy, the force that holds electrons and atoms together.  The machine, the Karburetor, operates on coal but uses a very small amount to release an unlimited supply of power.  Bondy becomes excited as he envisions the financial possibilities looming before him.  The Karburetor could be used to power whole cities, countries even, constructing a firm basis for the expansion of progress throughout the entire planet.  But Marek says there's a problem.  A byproduct of the process is that a sort of spiritual energy is released as a result of liberating the quantum forces, and human beings experience that release as the presence of God.  In the presence of the Karburetor, people become highly religious and enraptured and capable of performing miraculous feats such as levitation, curing diseases through the laying on of hands, mind-reading, and predicting the future.  Also, the machine seems to have a mind of its own.  It's capable of refining its own operations and inventing new processes to improve its own function, and apparently does so with a great deal of enthusiasm.

Bondy convinces Marek to let him market the device and in remarkably little time, Karburetors are operating world-wide.  And vast segments of the population are performing miracles, fore-seeing the future and forming sectarian groups devoted to assorted religious didacts that soon start to condemn each other's devotional rites, to the point that religious wars are eventually raging all over the globe.  It's not long before the activity turns political, so that large areas of factionally similar believers are combining to invade and conquer other countries.  At one point a sort of Napolean conquers most of Europe, and equivalent demagogs are successful in many other locales.  At the same time, the Karburetor is running wild, reproducing itself and consuming quantities of matter to make submarines, airplanes, trains, cars, lawn mowers, dish washers and a multitude of other products.

Because the Karburetor's source of power is infinite, it never knows when it's made enough stuff.  One philosopher compared it to the origin of the universe, wherein the destruction of quantum matter resulted in the release of infinite amounts of God, or spiritual force, which drove the remnant particles in a sort of explosion that created the stars, galaxies, super-novae, etc. as we currently observe them.  At any rate, a true world war developed on Earth, so that four or five major powers were fighting each other and destroying the infrastructure almost faster than the Karburetors could replace it.

The main reason, besides the uncontrollable operations of the Karburetor, for the global genocide was that each machine's devotees couldn't imagine that their belief was only a part of a planetary whole;  that they couldn't imagine that anyone else was in possession of the, what seemed to them, absolute truth.  So war continued unabated, in due course causing Bondy and Marek to flee civilization.  Bondy retires to a south sea island named Hereheretia and Marek builds a little cabin in an isolated valley north of the arctic circle.  (spoiler ahead).

Ultimately, the war dies out, with only a few humans left.  Thirteen soldiers are left napping under a Birch tree and after twenty years some kind of universal tolerance has reluctantly made an appearance.  Mr. Byrch:  "...  you know the greater things are in which a man believes, the more fiercely he despises those who do not believe in them.  And yet the greatest of all beliefs would  be belief in one's fellow-man."

This was a terrific book.  Capek had a profound understanding of human nature and the creative ability to express that vision in original and telling ways.  Like his other two books, he's a master of extrapolation:  taking an idea and developing it satirically into an exhaustive version reflective of human foibles.  He's one of the very few authors i've read who can combine horror with humor and turn the resulting shambles into an image of human conduct.  Or maybe a mirror image...
Posted by mudpuddle at 3:02 PM