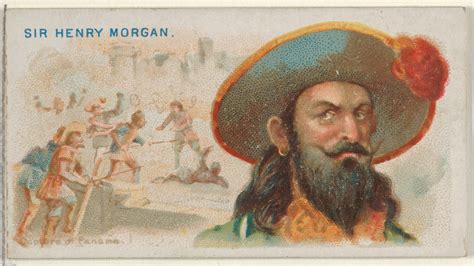 Henry Morgan was a farmer's son in Wales who left his family at about the age of fifteen and traveled as a deck hand to the West Indies.  He found work on Barbados working for a sugar plantation owner, who initially hired him on a four-year contract.  After two years, however, the owner became insolvent and was forced to let his hired help go, and to free his slaves.  This all took place in the 1650's, during the sporadic clashes between England, Spain, Holland and France.  The major conflicts involved the first two countries, but loyalties shifted frequently and resulted in a generally confused series of alliances that clouded the legal status of many of the 1200 to 1500 privateers and pirates operating in the vicinity.

Released from his job without recompense, Henry became associated with a group of unemployed sailors and hunters who were living off the land and casting about for work.  Their encampment was located near a fresh water creek not too far from the ocean, and passing ships often stopped to replenish their water barrels.  On one occasion, a Spanish ship stopped in the little bay and Henry convinced his compatriots that they should capture it.  So they did, Henry being the first to sneak aboard via the use of moss covered grapnel hooks (to make them silent).  The invaders only numbered 11 men, while a large number of Spanish seamen were engaged in drinking, sleeping, eating, and ignoring their responsibilities in general.  It was in the middle of the night, so the sentries were silenced and the rest of the crew cowed by the sudden assault.  The successful acquisition emboldened the new owners to cement their triumph by sending the former possessors on shore;  then they made sail and headed for Tortuga, a sort of free port where any ship was allowed to anchor, provided they had sufficient funds for satisfying the local merchants.  The ship actually was owned by Henry, as the usurpers had discovered a cache of pearls hidden in the main cabin wainscotting.  The wealth had been shared equally among the new owner/operators, but since Henry wanted sole command, he traded his share to the rest of his mates in return for proprietorship.  The lading was a cargo of logs which they sold profitably to a local carpenter.

Jack Morris, one of Henry's friends, wanted a ship, also, so they sailed back to Barbados in hopes of getting the local governor, Lord Modyford, to issue them Letters of Marque, so they could legally detain Spanish ships.  But on the way they saw the "City of Seville" crossing their bows, so they came about and fired a broadside into her, trusting that the "City" would be angered enough to chase them, so they could later declare that they were only defending themselves if they were accused of taking the ship in an act of piracy.  So Jack got his ship and the two vessels decided to go to the Isle of Pines just south of Cuba. After loading two cargoes of logs, the ships sailed to Port Royal in Jamaica.  Lord Modyford had just been appointed governor of that island and Henry wanted to obtain Letters of Marque from him to legalize his standing as a privateer.  Privateers were considered a step above mere pirates.  Modyford was not in a position to offer them the legal protection that they were seeking, but he indicated that since the island of Santa Catalina had been taken by the Spanish, they might want to take it back;  Modyford's son had recently been killed by the Spanish and this possibly accounted for his permissive suggestion.  This island was situated in the locus of many routes through the Caribbean and was of value for its location as a control point of said routes.  Attacking at night they found that the few soldiers present had decamped and they were able to establish a permanent English presence with some of the sailors settling there permanently.

Returning to Port Royal, Henry married his cousin Elizabeth and bought a plantation.  He immersed himself in domestic activities for a while, but soon started dreaming about more conquests.  Porto Bello was the shipping point for all the wealth that Spain had stolen on the west coast of the Americas, so was a logical next objective for investigation.  Assembling a fleet of nine ships and 400 men, he sailed to Cuba.  A force was landed on the mainland and, marching inland for thirty miles, they had a clash with Spanish troops who had been informed of their arrival by a seven year old boy.  They feted him later for his courage and resourcefulness at such a young age..  Back at the beach, they chopped up the cows for later food on the Porto Bello expedition.  A drunk sailor, a friend of Henry's, killed one of their French allies and Henry shipped him back to Port Royal for trial, re-affirming to all his interest in justice regardless of race, color, or creed.

The assault on Porto Bello went off without a hitch.  The first fort was abandoned by the Spanish soldiery which allowed the assailants to travel through the jungle to the  back of the town and take it without any resistance being encountered.  They found lots of treasure, and some of the men who had been left on Santa Catalina island were in the dungeons in a fearful state as a result of the Spanish retaking that island.  Bitter hatred against the Spanish was fomented in the invading forces because of their cruelty and avarice.

After another rest period in Port Royal, Henry next organized an expedition to Maracaibo, a large lake in Venezuela around which were located towns with lots of wealth.  The entry to the lake was through a narrow inlet that was guarded by a well-armed fort with alert sentries.  They weren't so alert when Henry's forces were going in, but after assaults of several of the local towns, they were itching for a showdown when the invaders began to leave.  Since the commandant in charge of the fort was familiar with Henry's tactic of attacking from the inland side of towns and forts, he decided to point all his cannon toward the surrounding jungle and provide Henry with a surprise of his own.  But, foxlike, Henry switched his plans and sailed through the straits without losing a ship.

Finally, Henry began planning the invasion for which he has been most famous:  the raiding of Panama City on the western side of the isthmus.  After gathering his ships and men, he sailed to Santa Catalina and reconquered it, then landed on the east coast of Panama and unloaded 1200 men and supplies and began canoeing upriver through the jungle.  They had to get out and chop their way on foot for most of the trip, suffering from hunger, fever, and multitudes of snakes and insects.  They reached the city in parlous condition, only to find tiers of government troops in elegant uniforms ready to repel the weary and suffering assailants.  But when the first shot was fired, the Spanish troops bolted:  they were untried and inexperienced soldiers who were poorly trained.  The governor of the city bolted also, but not before burning the city to the ground, save for the stone buildings.  So there was not nearly as much treasure as the privateers had been hoping to find.  This resulted in grumbling and cast a shade on Henry's reputation.

Back in Port Royal, after a period of rest and recuperation, Henry and Modyford were recalled to London to answer for their extra-legal enthusiasms.  Modyford was temporarily confined in the Tower of London and Henry was vilified by the press until it became clear that he had acted in the best interests of the crown and the state.  Henry met King Charles II and was knighted for his energies in the West Indies and Modyford was freed.  They both returned to Jamaica where eventually Henry was appointed governor.

This was the penultimate book that Ms. Mackintosh wrote.  Well written, of course, and, in the first hundred pages especially, contained the turns of phrase for which she is well known: speaking of the West Indian atmosphere:  "In other climes light is a negative thing, a mere absence of darkness.  But in the islands when the fronds of the palm trees move in the wind the light runs in and out among them like a live thing.  So now when the restless island wind played with the kerchiefs and the petticoats the light, too, danced and ran, and the crowd moved continuously, like a field of flowers in the sun".  She can make scenes vivid in just a few words.  Toward the second part of the book, though, the language became a bit more pedestrian, as if Ms. M was in a hurry to finish her work.  Since she died from cancer and was writing in her last few years, her ebullience and esprit may have been, as one would expect, curtailed.  Still, it was an interesting book, with well depicted and adventurous action scenes in addition to her poetic and enlightening effusions.  I'd not say that this work was on a par with the Alan Grant series, but it held my interest and provoked my curiousity...

Posted by mudpuddle at 1:57 PM