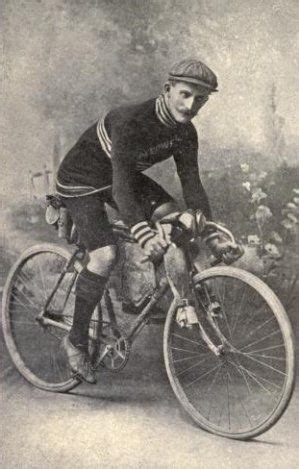 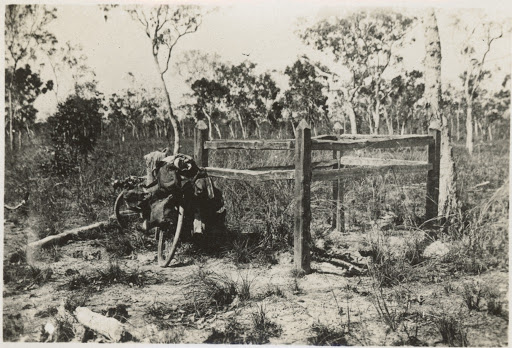 LONELY LANDS:  THROUGH THE HEART OF AUSTRALIA

August 21, 1907, Francis, escorted by members of the Sydney Cycling Club, left on a trip that was to take him to extreme northern Australia and back, in a circular route that passed by the Gulf of Carpenteria,  on to Port Darwin, and down through Alice Springs to Adelaide and then back to Sydney.   He was an experienced traveler, having enlisted in the Merchant Marine at the age of 15.  He'd circled the globe twice before his seventeenth birthday.  His bicycle was a Royal Speedwell equipped with a three-speed hub with freewheel, and Dunlop tires.  He was traveling light, the bicycle plus the requisite camping, eating, and sleeping supplies weighing 85 pounds.  He took a camera with glass plates and film with him, an aneroid barometer and, among other necessities, an assortment of chemicals.  Boric acid for sore eyes and feet and potassium permanganate for snake, lizard, and insect bites.

The first few days offered a taste of what he was to encounter off and on for the whole trip:  "wild dogs, demented dingoes", millions of ants, and bad water.  Not to mention snakes.  The terrain consisted of deserts, extensive areas of black mud, mountain ranges, loose sand deposits, and rutted and cracked dirt roads.  Each day presented its own challenges.  Several hundred miles north, near Ben Lomond, his brake cable slipped while coming down a big hill, and he luckily managed to evade the boulders littering the eroded road surface and came close to disaster at some of the sharp turns, the only major mishap being the discomfort experienced by his nether surfaces as a result of violent bouncing.  Near Ipswich he took a short cut that was distinguished by the presence of ten foot deep ruts in the not quite non-existent road.  Francis records that his bicycle bucked in alarm and bolted for about fifty yards at the sudden appearance of a three foot snake as thick as his wrist that made a dash at him from the tall grass.  He also describes the habits of alligators in Queensland that slyly lurk in the roadside underbrush until they smell a passerby and then jump out at him.  Once he noticed a brush fire looming in the smoky distance, but figured he could outrun it, which he did, but at the expense of two burned tires, some slightly burned clothes, and singed hair.  So he was forced to pedal the next fifty miles to the town of Gympie on bare rims.  He mentally patted himself on the back for his "saving sense of humor".  Between the towns of Mackay and Charters Towers, he hit a log while swerving around a rock and bent the front wheel into a pretzel.  A sympathetic family in a horse drawn wagon carried him into town and a blacksmith at Massey-Ferguson was able to fix it.  (I found that remarkable).  After being temporarily blinded in one eye by a bulldog ant, Francis cited a joke that concerned Sir S.W. Gilbert of Gilbert and Sullivan fame.  A friend asked him if he'd seen another associate with a sore eye by the name of Jones, to which Gilbert replied, "What was the name of the other eye?".  haha, sort of...  (Birles had a very wry sense of humor which crops up repeatedly throughout the book).  While contemplating a swim in a lagoon, he asked a local resident if there were any sharks in the area and was told that there wasn't.  But just before he jumped in, the local stated, "The alligators ate them all".

The coastal track around the Gulf of Carpenteria was mostly dry and barren, and Francis ended up having to push and carry his bike much of the way due to high grass, black, sticky mud and the lack of any sort of visible road.  The trip wasn't all a struggle against the elements, though.  Near the Gregory river he was surprised and delighted to see millions of multi-colored butterflies dancing in the sun amid the trees, celebrating the variety and abundance of life.  Immediately afterwards, it was back to slogging though muddy sloughs and coping with slick creek banks and peripatetically high water from flash flooding.  The mud got so bad it took him four days to cover fifty miles, and he was almost starving when he was rescued by the mail man.  This occurred near the town of Camooweal, a few low sheds situated by itself in a mud-plain, 200 miles from anywhere.

Further north-west, the muddy terrain changed in character to more of a swampy/jungle habitat, with a lot more water.  It rained 12" in five hours at one spot.  At one point he had to wade through a "blue-bush swamp" for three miles while intermittently up to his neck in water.  After removing the leeches and tending to his cuts, he was faced with eleven miles of pushing the bike through loose, deep sand deposits.  His boots had disintegrated by this time and he was soldiering on in his bare feet.  He ran out of food and had to walk (easier than riding)12 miles back to the last town to acquire provisions.  When the ground became firmer, he lost the track and was saved by  a party of drovers.  He was almost naked because he'd been burning his clothes to keep the voracious mosquitos from eating him alive.  Finally, in Brunette, a friendly storekeeper fed and clothed him, only to have him collapse for three weeks with a bad case of malaria.  Francis had left his bike hanging in a tree before becoming lost, so when he got well, he had to walk back and get it.

Pushing his way through high cane grass and bumping over rubbled and rutted roads, he arrived at last at Pine Creek, beyond the Catharine river.  He covered the final 60 miles in six and a half hours.  He treated himself to new clothes and a green salad, the first one on the trip, and, since he was close to Port Darwin, he cleaned up his outfit as best he could, so he'd be presentable when the Darwin Cycling club rode out to accompany him into town.  He was feted and applauded by all and sundry and observed that a "Chinese waiter had evidently served his apprenticeship in Fillemupagain", upon his refilling Francis's plate so many times.  Another malaria attack lasted eleven days and he left Darwin on July 18, 1908, destination Alice Spring.  He was weak and took his time, only making ten miles the first day, but regained strength quickly in order to tackle the black soil plains prominent on that leg of the trip.  There were lots of snakes, death adders, and centipedes as usual;  one snake was nine feet long.  They were attracted to the bicycle for some reason, possibly related to the whirring sounds produced by the spokes.  Deep sand and spinifex characterized the route, with varyingly deep trenches crossing the road.  A tale illustrating the nature of the underground maze of trenches:  a man lost his dog one day, but could hear him whining as he walked along.  Later that night, the dog appeared out of nowhere:  he'd apparently followed his owner's scent while following the labyrinth of subterranean tunnels underlying the area.

The final legs of the trek were sketchily described by the author, as they were comparatively tame and uneventful compared to the more northern segments.  He described the ten foot high ant hills and their magnetic natures that were a source of mystery at that time.  The hills are invariably oriented on a south and north axis.  He rested again at Tenant Creek, and at Alice Springs.  Later he noticed a camel caravan herded along by Afghani tribesmen, and collected shell fossils at Eyre Lake, 28 feet below sea level.  Once he reached Adelaide, the road was smooth and uneventful all the way home.  He reached Sydney on September 23, after covering 8300 miles in thirteen months.

This story was only the beginning of Francis Birles' adventures.  Later in his career he circled the continent of Australia twice and bicycled across it seven times.  He did a lot of pioneer motoring also, making some seventy excursions to various parts by automobile.  He took lots of photos on this trip;  he must have been one of the first experimenters in that genre, in Australia any way.

Some of the descriptions were laugh out loud hilarious and the overall tone of the prose was that particular wry Aussie humor, that sometimes takes a minute to sort out.  Very entertaining to read, however, and clear and informative as well as occasionally scary.

Posted by mudpuddle at 3:02 PM