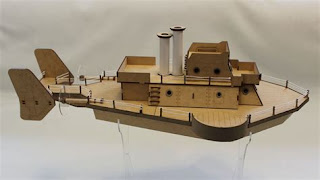 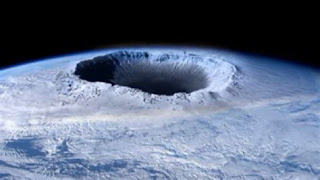 THE SECRET OF THE EARTH

The Dutch ship Voorne was cruising near the Celebes Islands in the late 18th Century when a crew member spotted a casket floating with a short mast attached to it.  Picking it up, the Captain found a deteriorated manuscript inside entitled "The Attlebridge Papers".  It told a remarkable story of exploration and adventure by a pair of American twins:  Gurthrie and Torrence Attlebridge.  (The following is not non-fiction, so far as i know...).

The twins had just arrived in London, having failed to arrange monetary support for Torrence's new invention in their homeland, and were hopeful about discovering it in England.  They were staying in a cheap hotel room, casting about during the day for entrepreneurs willing to back an unusual project.  The firm Wetherbee and Hart seemed a decent prospect, but the former owner and operator, Mr. Wetherbee, was too old and decrepit to offer much help.  His partner, Hart, suggested they use an abandoned barn on some of his property to carry out their constructions.  The twins split up for a while, hoping to double their chances of making money, but Gurthrie was at the end of his tether when he reunited with his brother several weeks later.  Torrence was ebullient and apparently rolling in money.  He took his brother to the most expensive hotel in town and although he wouldn't share the source of his new-found wealth, he promised great things for the future.  Months later, after the expenditure of wagon-loads of money, Torrence woke Gurthrie up one night and they escaped from the hotel over the roofs.  Making their way to the afore-mentioned barn, they carefully stepped over numerous bodies lying asleep around the barn entrance and climbed into what looked like a double-ended vessel made of aluminum, with a cabin and an observation deck on top.  Silently, Torrence twiddled a few knobs and the ship silently arose and floated out of the barn and away into the sky.  Totally mystified, Gurthrie speechlessly asked his brother to explain.  Torrence has invented an anti-gravity engine and is using it to propel the airship.

They fly north.  Adventures ensue, involving attempts  by Hart to arrest their escape, claiming he has an interest in the ship due to unpaid bills, which Torrence says is nonsense.  Leaving Britain, they fly silently above the clouds, admiring the rainbow colors produced by refracted light at sunset, and the unreal sense of living in a magical environment.  They stop briefly at Spitsbergen before continuing north, and while dining on the beach, Torrence shares the story of his sudden wealth.  He had met by accident an ancient mariner who told him a fantastic tale of unlimited gold and jewels in a land far to the north.  The sailor was dying and as a last request, had asked Torrence to travel there and verify his account which he had failed to convince anyone was true.  He donated his wealth to finance the expedition and the completion of the airship, amounting to millions of dollars in gold and diamonds.

They sail on through storms and fog until they reach a range of 12,000 foot high mountains with two gigantic pillars delineating a sort of gate to the land beyond.  The compass has been behaving erratically for some time and after they float through the mountain gate, the light becomes softer and the horizons vanish in a kind of fuzzy luminescence.  They land briefly on a pink beach on which pearls are scattered about randomly by the thousands.  At this point, Torrence explains to his brother that they are now 1,130 miles north of the North Pole, and further elucidates, that they are inside the planet, which in point of fact is hollow and floats through space like a giant soap bubble.  The illumination surrounding them is reflected sunlight from the sun, and is seasonal:  for six months the light enters the cavity from one end and for the remaining six months, the other end receives the sunlight while the first area is dark.

They travel over forests and fields, occasionally spotting highly decorated ships on the rivers.  Swooping down, they realize that the sailing ships are covered with gold and jewels of every description.  In fact, in this land, the minerals that are priceless on the earth's surface are common as dirt on the inside of the planet, so everybody has however much they want.  Soon after, they approach a large city.  It has a 300 foot high arched gate at the entrance, and on top of that a 100 foot statue of a golden man reaching his hands toward the skies.  The people below become excited and ring bells and blow trumpets and run along the streets following the ship as it slowly progresses along above the minarets, towers, arcades, hanging gardens, palaces and parks that make up city's infrastructure.  Passing into the surrounding farmlands, they pause at a low eminence a few miles away and stretch their legs while picking up a lot of gold and jewels.  A crowd of inhabitants has been following them however, and before they're aware of it, the horde has almost reached their position.  One fellow actually manages to board the ship, but they turn around and take him back to the city, flying low enough so that the people can see that they mean him no harm.  Piles of emeralds and diamonds are thrown into the ship as a sign of appreciation.

Torrence and Gurthrie continue on, sailing a long way over the fruitful land.  They note that the wheat grown in this vicinity doesn't have to be processed;  it's edible directly from the husk.  Fruits of all sorts, and of many that they don't recognize, abound in vast orchards interspersed with the fields of grain.  After observing for a time, Torrence realizes that in this world, nobody has to work.  In fact, trade is non-existent for all practical purposes, as food is readily available to all, and money is not needed or used.  The arts seem to be the principle occupation of the citizenry, and murals and statues decorate all the buildings.  From the airship, the only music to be heard is echoing trumpet sounds that have a carrying quality partly due to the clear and refreshing atmosphere.

At length the bounteous countryside begins to fade, to be replaced by a more desert-like climate.  Husbandry dies out and the population thins away.  They soon find themselves in an uninhabited wasteland with no water or plants, just red dirt and rocks.  And after a while the propelling mechanism on the ship starts to fail:  something about the heat effecting the temporal vibrator has thrown it out of whack, so they gradually sink until they're just off the ground.  The brothers dump as much gold over the side as fast as they can, but eventually they are grounded and stuck, miles from water or assistance.  They see a range of hills in the far distance and Gurthrie starts walking in hopes of finding water while Torrence tries to repair the vessel.  Gurt  feels he's dying and collapses on the sand, his last impression being of a vulture-like bird with a fifty foot wing span hovering just overhead.

Gurthrie awakes in a cool stone room without knowing where he is.  He begins exploring and discovers that he is in a labyrinth of passages that penetrate the range of cliffs that he and his brother had seen from the ship.  In fact the cliff-side has been turned into a palatial warren for its residents, who appear to be some sort of monastical society.  Creeping through the dark hidden tunnels, Gurthrie finds a large stone door which he manages to open.  Inside the walls are decorated with vast images of unknown creatures and the ceiling consists of transparent mosaics splitting the incoming light into a myriad shades of subtle color.   He suddenly realizes he is not alone, but there are a lot of ornate chairs standing in rows before the far wall and that they are occupied by silent figures of ancient aspect.  One of them slowly turns his head and looks at him with silent significance.  Gurthrie quietly leaves and continues wandering.  He meets an old white-haired man, tall and rail-thin, who leads him into another room and closes the door on him.  Gurthrie anxiously looks for a way out, but sees nothing but stone all around until he notices a narrow ledge leading up toward a square opening in the roof.  Climbing up, he finds himself on top of the cliff with no way down.  He despairs, but at the last moment sees the airship approaching from the desert.  It lands and rescues him and they sail away.  Torrence explains that  he had been on the point of expiring when one of the large vultures landed beside him and left a small barrel full of water and food.  As a result, he was restored and managed to repair the vibrator and begin searching for his brother.  The vultures were apparently sort of St. Bernard dog of this world, employed to rescue travelers and save lives.

Eventually they cross the remaining one hundred miles of barren mountain ranges and enter once more into inhabited areas, with grandiose cities and rich farmsteads.  They don't land anywhere, however, as they can't speak the language and are becoming a bit homesick.  So they continue on for thousands of miles until the weather becomes colder once more and they find themselves with an operational compass which tells them they are pointed north.  They have left the underground world.  They point the ship toward San Francisco and note the gradual disappearance of the ice and snow, and the presence of the Pacific Ocean.  But after several days, they see that they're losing altitude again.   They milk their machine along until they are just about to be subsumed in the large waves (the tail end of a storm) when Torrence grabs a barrel of oil and dashes it into the  water, thus calming the wave action and allowing the ship to beach itself on an unknown island located at about 23 degrees south of the equator.  And upon investigation, they discovered that a crucial part of the complex machinery had broken in two.  And there was no way to repair it without access to a machine shop.  So Gurthrie wrote down all that had happened to them and set it adrift inside a small casket, hoping for rescue some day.  A year passed and relief had not arrived, but they still live there in hope...

This was a great read.  Not a great book, i suppose, but certainly well written and entertaining.  Beale is one of those authors that it is a delight to find because of their alluring gift for description and clear exposition.  He wrote only one other book that i've been able to find, about a ghost.  Although this book was published in 1899, the Symmes theory of a hollow earth (see my post several weeks ago) was still taken seriously by many members of the public.  The North Pole was not reached until 1908, so the possibility of unknown lands seemed real to a lot of people.  In some ways, it's legitimate to express the idea that "ignorance is bliss", lol...
Posted by mudpuddle at 4:19 PM